There’s no better way to get in the morbid mood that with a good book. But everyone knows Dracula, The Shining and The Haunting of Hill House. Let’s dig a little deeper and find some lesser known gems to add to your reading queue for this Halloween season.

If ever there was a tragically underrated novel about a doll that may or may not be alive (it’s alive), it’s this one.

The story of Corky Withers and his crude ventriloquist’s dummy Fats is as captivating a psychological thriller as you’ll find on this list.

The sometimes dizzying time jumps and point of view changes only add to the chilling climax of this one.

Be sure to read this one with the lights on and closet doors firmly closed. A blanket to keep your feet tucked into wouldn’t be a bad idea, either.

Many within the horror novel community will tell you that Whitley Strieber’s early work earned him a spot amongst the Kings, Barkers, Campbells and Straubs of the literary universe. Wolfen is his debut novel and it’s everything you’d hope for in a werewolf novel.

Vicious, mysterious deaths are suffocating New York City. A pair of detectives begin to realize that the deeper the investigation goes, the more horrific it becomes.

Another novel that hops from one point of view to the next, this only adds to the suspense.

Seriously, if all you know about Whitley Strieber is the alien abduction stories, do yourself a favor and take some time to check out his horror novels. They are well worth it.

The Doll Who Ate His Mother, by Ramsey Campbell Mr. Campbell is firmly entrenched atop the horror literature totem pole, alongside all of the people you may think of before you land on Ramsey’s name. Don’t let the name game fool you, though- Campbell is acknowledged as the world’s most honored living horror author for a reason. If you aren’t spending time with his novels, you’ve got a lot to learn.

Campbell’s debut novel tells the story of Clare, a schoolteacher who is involved in a terrible car accident that claims the life of her brother. The weird stuff starts up pretty early on when an onlooker scampers up to the crime scene and removes the brother’s arm. Equal parts macabre and crime-thriller, there’s no better book to start your affinity for Ramsey Campbell with.

Bonus points for possibly the best horror novel cover ever.

The Cipher, by Kathe Koja 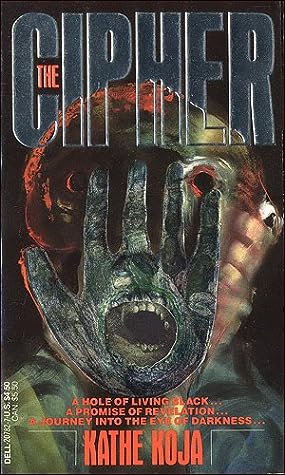 I’ve talked about this novel on this blog before. I’m going to keep talking about it until everyone I know has read it.

I love everything about this novel. It’s bleak, it’s real, it’s creepy as hell.

A couple find a hole in the storage room floor of their apartment complex. But this isn’t your average hole- this is a pure black void that pulsates. And it is alive.

Naturally, things start getting put into the hole. When does it end?

It’s not the easiest book in the world to track down but is an absolute must-read for any die hard horror bibliophile.

The Seance, by John Harwood

A woman is afflicted with terrible, nightmarish visions of death and grisly horrors. She decides to attend a seance to get things in order with her life. What could go wrong?

Constance, the main character, is struggling with these visions and the heartbreaking relationship she has (or doesn’t have) with her mother. To further make things weird, she has just inherited a massive mansion that is reputedly haunted. Because why wouldn’t it be?

The novel simply oozes with tension and dread. As a sucker for slow burns, I absolutely adore this book.

Got any books you’d like to recommend? We’d love to hear ’em!