Growing up, there were few moments more exhilarating than opening up your cardboard box or paper bag and fishing for that little baggie wedged somewhere between your burger and fries. Or maybe it was under the wad of napkins. Or maybe you really got hosed and they forgot to put a toy in your age-friendly meal. Here’s hoping you had a cool enough parent to turn around and run inside to get you the toy you were rightfully owed.

If you’re reading this post, you probably were all about this time of year, when the toys took a turn for the weird or mildly creepy at your favorite fast food establishment. Let’s hop in the drive-thru lane, ask them to hold the pickles and onions and see what’s inside that bag..

Burger King put everyone on alert that Halloween still means something when they came out with arguably the coolest toy collection this side of the original McDonald’s offering.

Not only does this collection feature America’s favorite animated family, but each character is given the perfect Halloween makeover. Marge as a witch, Grampa Simpson as a vampire and Principal Skinner as a zombie are my personal favorites. Depending on the condition, you can pick up this collection on eBay for roughly $40. 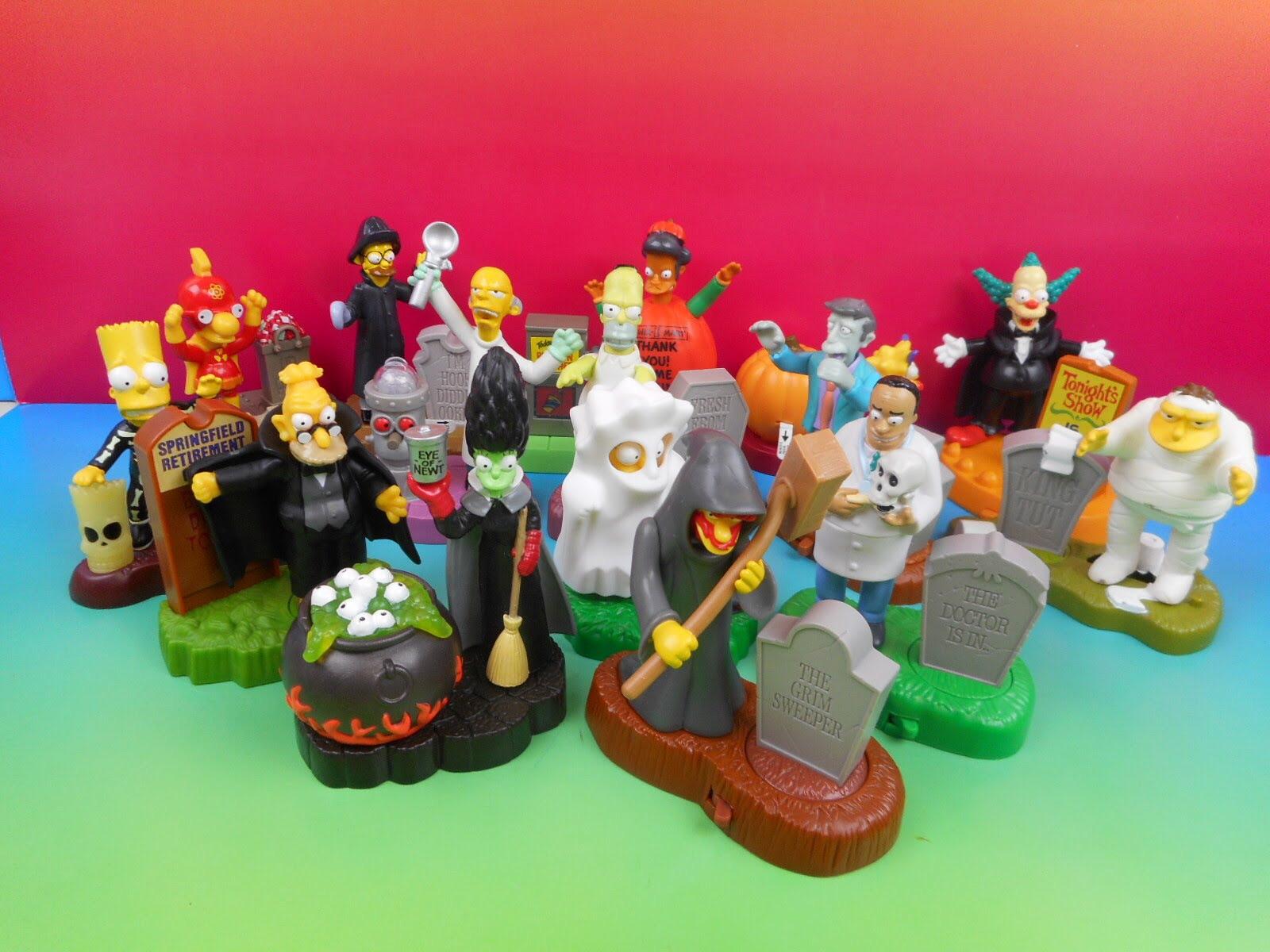 All hail the King, baby.

This set consisted of four figures of the Universal variety. Frankenstein’s Monster, Dracula, the Wolfman and The Creature from the Black Lagoon were all featured in this fantastic set. Released the same year the U.S. Postal Service unveiled commemorative stamps honoring the classic creatures, each figure has its own little pizzazz to make them truly memorable.

Dracula’s coffin came with a small turn key that allowed Dracula to rise up a la Nosferatu.

Frankenstein’s lab table lit up and his head and hands were translucent green to allow the light to faintly come through when the monster was attached to the table.

The Wolfman has a Scooby Doo look to him and he bursts out of wooden cellar doors with enough force to scare a senior citizen.

The Creech was completely translucent and he squirted water! 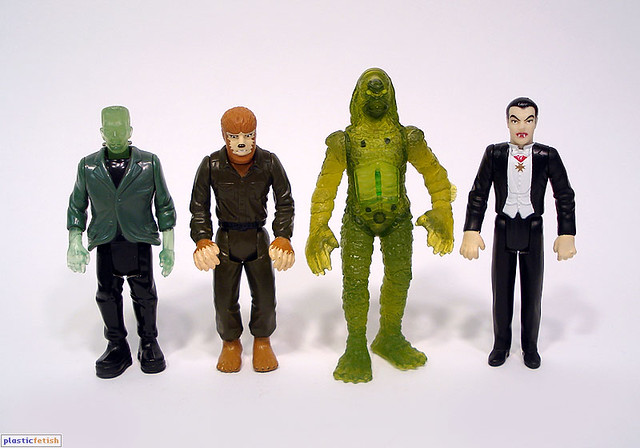 This collection of six figures are downright glorious. Vladi the vampire, Ghul the zombie, Beastor the (Frankenstein) monster, Mummentut the mummy, Wolvadian the werewolf and Urzella the witch might be seen as the less attractive step-siblings of the Universal counterparts, but seriously! Look at these beasties. They came with a spring-loaded coffin that allowed each character to ominously rise from their crypt. You can pick up a set off of eBay for around $50. Fun fact- Urzella the witch is a UK exclusive, not actually released in the US. Mummentut is the US exclusive.

It wasn’t a matter of if these guys were going to make the list, but when. If there was one photo that could be used to sum up my entire Halloween-loving chilhood, it may very well be this one. The toys were such a hit that the burger franchise has released quite a few other runs of them over the years, but nothing will ever beat the originals. Seriously, look at these things. They’re adorable and just glistening with Halloween goodness. Must-haves for any Halloween collector.

The original fast food Halloween giveaway. These things are the coolest of cool.

McPunk’n, McBoo and McGoblin not only kept your food steam-heated, they also made for great trick ‘r treat buckets and year-round holders of all things small. Much like the McNugget toys, there have been different runs of Halloween buckets (some of which make the list a little further down) but you just can’t top an original. The granddaddy of Halloween fast food awesomeness.

I’ve found a number of these, in varying condition, at thrift shops throughout the years but you can nab a like-new set online for around $40.

I was nine years old when this set came out. My sister was six. Every Tuesday, my grandmother picked us up from school and we spent dinnertime at her place until my parents were off work. The ride to her house and from her house consisted of twenty-seven minutes of the cassette on repeat. Twenty-plus years later, I’m not proud of that fact but the truth remains. To be fair, those car rides were also some of my most cherished memories of said childhood. I love you, Grandma. Thanks for putting up with me.

Not the most inventive lot on the list, there’s still just enough Halloween flare put into the stuffing here to make the grade. As a bonus, each creature makes a ghoulish noise upon being smacked against your palm or thrown against a younger sibling from across the room. 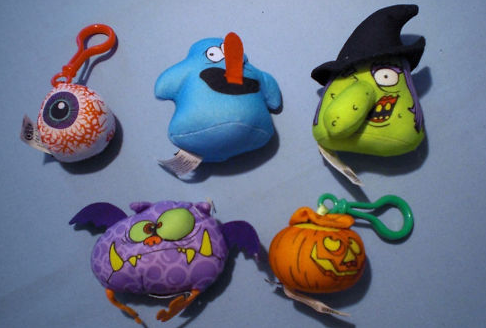 If I were to list the ten things I love most in life, Halloween and Scooby-Doo both make the list. So it’s only natural that these pails make the list. I have the white one proudly displayed in my office and will be getting the Mystery Machine pail shortly.

There isn’t much more Halloween than It’s The Great Pumpkin, Charlie Brown and it’s surprising that it took until 2016 for one of the fast food franchises to cash in on featuring the universally loved Peanuts gang. 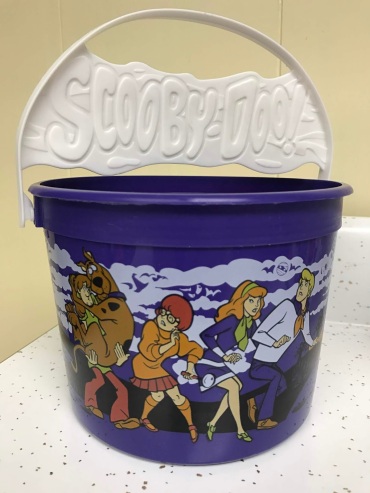 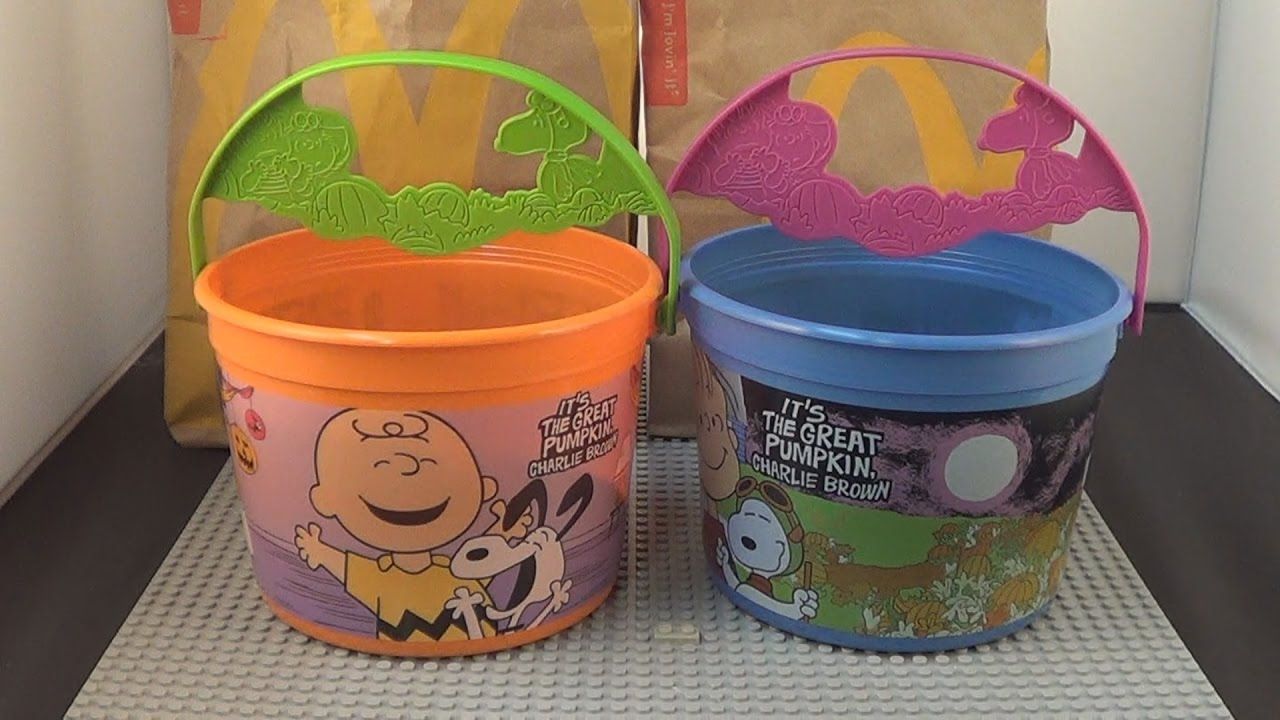