The residents of 1313 Mockingbird Lane have been a genre favorite since they were introduced to audiences on September 24th, 1964. The show would last for two seasons consisting of seventy episodes total.

The Munsters achieved a massive following after the series was cancelled in 1966, with syndication keeping the family around for the last fifty-plus years.

From 1964 to 1966, CBS aired The Munsters concurrently with the Addams’ and Herman, Lily and Grandpa Munster reached higher ratings than their ABC counterparts. While the series doesn’t have as many spin-offs or revivals as the Addams’, the series is one of the most popular in the horror community.

The series tells the story of a family of random monster film stereotypes. The patriarch, Herman, is a Frankenstein’s Monster clone while his wife Lily and father-in-law Grandpa are vampires. Son Eddie is a werewolf. Marilyn Munster, who joins the family as Lily’s niece, is a regular human who “gets her looks from Lily’s side of the family”, per Herman.

Since Universal produced the series, the characters were able to enjoy the likenesses of cinematic icons. Make-up for the show was created by Bud Westmore, who was one of the biggest names in Hollywood (namely Universal) practical effects during his career.

Fred Gwynne (Herman) and Al Lewis (Grandpa) worked together for two seasons before The Munsters on Car 54, Where Are You? The duo had their comedic timing down to a science by the time they slipped into the creepy corridors of 1313 Mockingbird Lane.

Yvonne De Carlo was firmly entrenched as a Hollywood star when she accepted the role of Lily Munster. The pilot episode’s reviews came in and forced the creative team behind the series to re-cast the family matriarch. Gwynee and Lewis, especially, were concerned that a movie star like De Carlo wouldn’t cut it on a goofy show like The Munsters. “We were wrong,” Lewis would say years later.

While Gwynne made for a formidable Monster, the costume itself was a nightmare for the actor. Forty pounds of foam rubber padding covered his extremities. Back and foot pain quickly became the norm due to the added weight and the enormous asphalt paver’s boots he wore. Gwynne would quickly dehydrate in the costume and soon crew members acquired an air tank to blow cool air into the costume to keep Gwynne comfortable in between takes.

Bert Lahr, best known as The Cowardly Lion in The Wizard of Oz, was approached for the role of Grandpa Munster but passed. That’s good news to me, as Lewis was born to play the role.

While Lewis played Grandpa (Lily’s father), Lewis was actually a year younger than Yvonne De Carlo, who played his daughter on the show.

The Munsters’ cuckoo clock was famous for having a raven poke out and shriek, “Nevermore!”. The voice of the raven? Legendary voice actor Mel Blanc (Bugs Bunny, Daffy Duck, Barney Rubble, to name a few).

Kenneth Strickfadden, best known for creating Dr. Frankenstein’s laboratory in the classic horror film Frankenstein, created Grandpa Munster’s lab for the series. Some props from the 1931 film were used in Grandpa’s lair!

The show was such a hit, Gwynne and Lewis participated in the 1964 Macy’s Thanksgiving Day Parade, riding down the street in the Munster Koach.

Speaking of Munster vehicles, the beloved Drag-U-La was built using a real coffin. Of course, you were not allowed to buy a coffin without a death certificate back then, so the coffin was paid for in cash and secretly left outside of the funeral parlor so the crew could pick it up in the middle of the night! The man who created the vehicle, George Barris (also known as the man behind the original Batmobile) also built The Munster Koach.

Tom Daniel was the one who designed both vehicles. 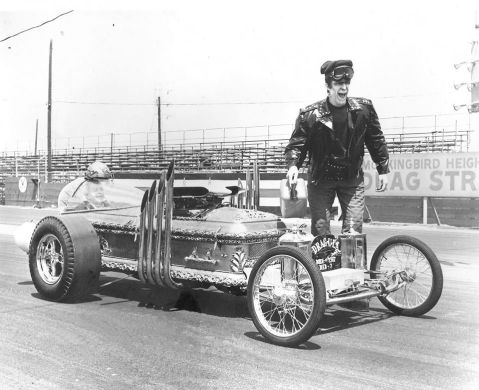 The Munster home cost roughly $1 million to create, no small chunk of change for a series in the 1960’s that only lasted for two seasons!

Herman and Lily were one of the first TV couples to share a bed! This, of course, would be an issue in and of itself however discussions were raised even further- if Herman and Lily weren’t actually humans, was it okay to even consider showing non-humans sharing a bed in a marital manner?