There are some – too many, in this writer’s opinion – who weren’t aware that long before the black-and-white television series, The Addams Family were alive and kicking in newspapers. The original version of the family were featured in The New Yorker as one-panel illustrations, a small cluster of a much larger Addams family that has spooky and mysterious families all over the globe. Inspired by his childhood neighborhood, Charles Addams had his animated family living in a massive Victorian mansion.

The family was a ‘weird mirror’ of what every family should be. Mother and father are doting, enthusiastic and engaging parents. Father (Gomez) and Mother (Morticia) are still madly in love with each other even after two children and a lifetime of chaos. Grandpa Frump, later ‘replaced’ by Uncle Fester in the TV and film series, was an active participant in family activities. The children were rambunctious, creative and close-knit to one another. If you stripped away the dilapidated mansion, the odd hobbies and creepy interests, The Addams Family were the perfect American family.

In 1964, ABC TV adapted the comic series into a 2-season television series that ran for sixty-four episodes. Perhaps the most well-known aspect of the show, the opening sequence and theme song was performed by long-time TV contributor Vic Mizzy. He also did the theme for Green Acres and The Don Rickles Show.

The show was an exact replica of the comic series, detailing the everyday struggles a family of weirdos and creepers would have in a world of not-so-many weirdos and creepers. When a ‘normal’ person entered the picture, whether it be a classmate of Wednesday or Pugsley, a mail person or a nosy neighbor, they often were playfully depicted to have been driven mad by the shenanigans occurring at 0001 Cemetery Lane.

Starring John Astin as Gomez, Carolyn Jones as Morticia, Lisa Loring as Wednesday and Ken Weatherwax as Pugley, the series was wholesome and hardly even sniffed a controversial manner, a must-watch for many families.

You can still find episodes playing on Antenna TV, a classic film and television channel on Xfinity.

In 1973, the family was revived in animated form on NBC. Instead of dwelling in a musty mansion, the family toured the country in an similarly spooky RV. The family members were drawn to the specs of the original comic series and featured the voices of Coogan and Cassidy returning as Uncle Fester and Lurch, respectively. The series lasted one season and a comic series was introduced as well, but that only lasted three issues.

1977 brought the family together again, this time with two more children (Wednesday Jr. and Puglsey Jr.) and Gomez’s brother Pancho, for the made-for-TV movie Halloween with the new Addams Family. The original cast starred in the NBC special and while it’s certainly not the greatest television film ever, it’s worth a watch for die hard Addams lovers.

It took fourteen years for the family to return, this time to the big screen with 1991’s The Addams Family. Directed by Barry Sonnenfeld and perfectly cast throughout, the film was a success as it made over $190 million on a $30 million budget.

The movie reveals that Fester has been missing for twenty-five years after a nasty falling-out between him and Gomez. Chaos rains down on the Addams mansion when Uncle Fester returns unexpectedly, claiming to have been lost in the Bermuda Triangle for the last two-and-a-half decades. Of course, things aren’t as they seem and we soon learn that the man claiming to be Fester may very well be an impostor.

The movie is a high-pitched goof fest, complete with unhinged performances by Raul Julia as Gomez and Christopher Lloyd as Uncle Fester. A young Christina Ricci as Wednesday is still the spirit animal of millions of Halloween-loving ladies. Anjelica Huston is sultry and provocative as Morticia. 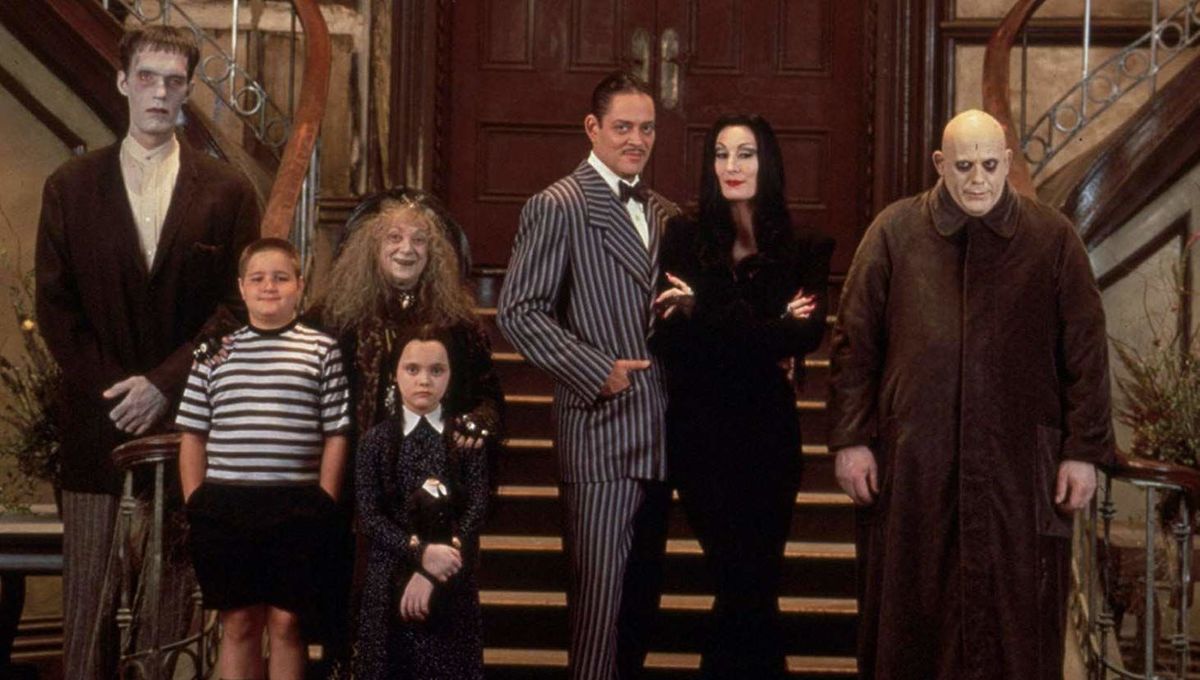 Two years later, a sequel was born! Sadly, the film did far worse than the original, barely breaking even on its $48 million budget.

Gomez and Morticia hire a nanny to watch after their new bundle of misery, Pubert. The nanny, a mysterious woman named Debbie (Joan Cusack), is a black widow who sets her sights on Uncle Fester. With the hopes of reeling in the Addams’ fortune, Debbie begins her attempted murder plots against Fester.

While Wednesday and Pugsley are away at camp, Wednesday finds love (perhaps) and the camp burns to the ground (literally). The family reunites, of course, to get rid of Debbie and keep their all together ooky family intact.

Some eighty years after their introduction, The Addams Family remains one of the most recognizable, beloved and important families in American pop culture. There have been numerous essays presented throughout the years, spotlighting the familial bond that just about everyone should aspire for. The family was progressive before that was even a thing, incorporating different species to form one family unit. It doesn’t take much imagination to realize that the idea of segregation and racial classifications didn’t exist in the Addams’ universe.

The family doesn’t conform to the stereotypes meandering around them nor do they dismiss those who are different than them. In fact, the family often goes out of their way to befriend strangers. All of this being said, you’re hard-pressed to find a more loving and personable family in American pop culture history.

Ray Bradbury and Charles Addams teamed up on Bradbury’s short story, Homecoming. The story was about a family of monsters from Illinois (Bradbury’s home state) called the Elliots. There were a few discussions between Addams and Bradbury about creating a full book with the history of the fictitious family but things never came together. Bradbury went on to write more tales about his monster family and Addams, of course, continued with his universally loved freaky family.

While the TV series was running, The New Yorker editor William Shawn pulled the comic series from the publication. He wasn’t interested in featuring characters associated with a low-brow form of entertainment like television in his prestigious paper. Following Shawn’s retirement in 1987, the family made their return to the paper.

Scooby-Doo and the gang met the Addams’ in 1972 as a part of Hanna-Barbera’s The New Scooby-Doo Movies. Four members of the TV series lent their voices to the animated film – John Astin (Gomez), Carolyn Jones (Morticia), Coogan (Uncle Fester) and Ted Cassidy (Lurch).