The Fourth of July has apple pie, Christmas has the Big Guy, Easter has eggs and that wonderful plastic grass that falls out of children’s baskets and gets stuck on your socks. But this is our time of year, where it gets dark before dinner and the freaks indeed come out at night.

What’s more synonymous with Halloween than the haunted house? The majority of folks who celebrate Halloween will spend at least one evening navigating a local haunted house attraction. Some people will drive miles, hours and across states to find the perfect haunt. Others will be running those haunted houses, soaking up the screams of their willing victims and hopefully enjoying a wildly successful season.

Celebrated on the second Friday of every October, National Haunted House Day has popped up over the last few years and is a way for the haunt community to come together and enjoy a day just for them.

The idea of the celebratory day is to not only pack the hallways and basements of every haunted house in the country but also encourage those haunts to donate to a charitable cause of their choice. It’s all about helping each other. 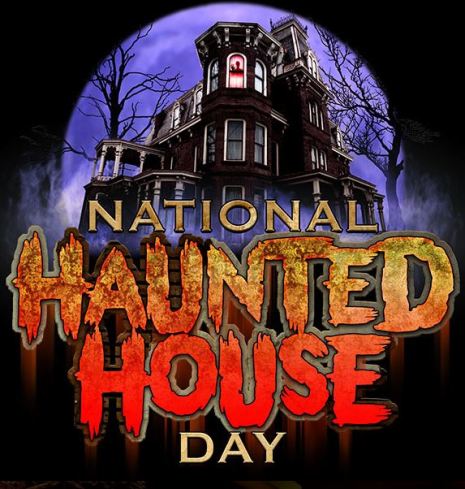 Arguably the most versatile character in the genre, the haunted house can be an epicenter of supernatural activity looming ominously atop the hill, awaiting its next guests. In that instance, it’s the setting for the terror. But what happens when the house itself is a main character in the film? If you’re looking for a good horror film that stars the house itself as a main reason for your nightmares, look no further than the list below!

The Changeling – the granddaddy of haunted house films, the story of a grieving man struggling to maintain a grip on reality while living in a home with a nefarious past is a must-watch for anyone who considers themselves a fan of the genre. George C. Scott gives a masterful performance as the film’s protagonist. You’ll never look at a rubber ball the same way again.

The Conjouring – James Wan’s take on a house tormented by the curse of a witch and the bodies left behind is one of the more creative and fun spins on the genre in recent memory. There’s nothing scarier than a dark cellar and someone – or something – snapping their fingers back at you when you know you’re the only one in the room.

House on Haunted Hill – I live by the motto “If it’s got Vincent Price in it, it’s great” and this thought process holds true in this, one of my all-time favorite spooky flicks. A group of strangers come together to spend the night in a reportedly haunted house, with a fat check waiting for them at sun up if they survive. Of course, ghastly spirits and unearthed secrets throw a wrench in the party’s plans.

Thirteen Ghosts – perhaps the most fun, gory and downright terrifying haunted house film you’ll find, this one is jam-packed with early 2000’s fashion and the greatest makeup effects you’ll ever see on a collection of ghosts. Seriously- if you saw this film in theaters and was younger than sixteen, you’re lying if you tell me The Jackal didn’t give you nightmares. I didn’t take trash out after dark for a month upon seeing this film.

Ju-on: The Grudge – have you ever seen a movie that made you scream aloud? This one did it for me. I still don’t like looking at staircases. The home in question here absorbs the violent energy that has occurred within its walls and then projects that terror onto whoever visits. This one simply oozes with nightmare fuel.

The Woman in Black – based on the unnerving 1983 novel by Susan Hill, this adaptation stars Daniel Radcliffe and provides some truly chilling moments. The isolation of Eel Marsh House coupled with the paranoia that grows slowly but steadily within Radcliffe’s character sets the ominous tone that Hammer Films have been known for over the last sixty years.

Stir of Echoes – A husband and father gets in touch with his supernatural side far closer than he ever wanted to. After undergoing a hypnosis session, Tom begins to see and feel the anguish of a missing teenage girl whose disappearance has upset an entire community. Tasked with revealing the truth, Tom loses himself in the mystery and horror of the young lady’s death.

The Sentinel – a beautiful young woman finds the apartment of her dreams in New York City. There’s just one problem – the building is located squarely on a portal to Hell. What could go wrong? The model is forced to relive trauma from her past as the neighbors and walls are closing in on her. It all leads up to one trippy, unsettling climax that isn’t for the faint of heart.

Once you’ve fused to your couch after that movie marathon, what better way to stretch out the legs and get the blood pumping again than to check out a few actually haunted houses? There are a ton of notoriously afflicted homes across the globe but we’ll point the spotlight in two in particular here: New York City’s ‘House of Death’ and Kansas’s Sallie House.

14 West 10th St. in New York is a ghastly slice of darkness in an otherwise beautiful New York neighborhood. Home to twenty-two ghosts, this looming brownstone residence is one of the most haunted properties on the East Coast. From 1900-1901, iconic author Mark Twain lived in the building, and of course he is reported to be one of the twenty-two spectral tenants roaming the corridors today. Visitors claim to spot Mr. Twain in an all-white suit near the first floor staircase.

In the 1930’s, the massive one-family home was converted into a multi-family apartment complex like many other brownstones in New York City. Once that happened, there were plenty of other souls to come in and out of the residence, of course.

Off-Broadway actress Jan Bryant Bartell moved into one of these apartments with her husband shortly in 1957. Bartell encountered several spirits in the home, including that of a “monstrous moving shadow”. It should be noted that Bartell suffered from depression during this time and many paranormal believers suggest that could have played a part in her encounters with the supernatural. The actress would go on to write a book about her experiences in the home, called Spindrift: Spray from a Psychic Sea.

There have been numerous investigations in the home and besides Twain and Bartell’s dark shadow, there have been reported sightings of a lady in white, a gray cat and a young child.

In 1987, the home was the scene of a terrible crime in which an attorney named Joel Steinberg beat and murdered his six-year-old illegally adopted daughter. Some believe that helpless victim is the child that is seen frequenting the floorboards of the property.

Just about every town in the United States has their own haunted house. But 508 N. 2nd Street in Atchison, Kansas may very well have the haunted house of America.

When a young girl by the name of Sallie was suffering from a stomach ailment in the 1800s, the home soon became the site of a grisly tragedy that cost the girl her life.

A doctor named Charles Finney owned the home and used the front as an exam room and office space for his practice. A poorly conceived appendectomy attempted in the home led to Sallie’s passing. The doctor started the surgery before the anesthesia fully sedated the poor girl and Sallie died in the home shortly thereafter.

The girl’s story went mostly unheard for almost 100 years until the residences of the home began experiencing abnormal instances, including disembodied voices and appearances by Sallie and a middle-aged woman. The older woman was responsible for the more dark encounters at the home. It’s thought that the woman is actually Sallie’s mother, distraught over the loss of her beloved child.

Visitors report scratches, mysterious fires and foggy apparitions appearing throughout the home. Besides Sallie and maybe her mother, there have been stories of ghostly visits from a Civil War soldier, an adult and a young boy who died the year after Sallie from a botched murder/suicide by his mother (the mom lived, the boy did not).

The atmosphere in the home is a palpable dread and investigators have also claimed that their equipment malfunctions and emotional trauma comes upon visiting the home, too.

Tonight, I’ll be headed into the cornfields of the Abandoned Haunted House Complex in Mount Pleasant, Wisconsin for a night of haunting followed by a blustery Saturday of haunts, as well. If you missed my piece on what it’s like being a new member of the Abandoned family, check it out here.

Do your civic duty and go enjoy a haunted house tonight!