You’ve gotta see 1982’s Creepshow. It’s a rite of passage for any horror-loving guy or gal. Directed by George A. Romero with a screenplay by Stephen King and special effects provided by Tom Savini, it is the gold standard of horror anthologies.

Equal parts terrifying, hilarious and wonderfully dark, Creepshow is one of the very few horror films that the entire community agrees on – it’s a classic.

Rumors of a reboot have been floating around for years. Many believed that when M. Night Shyamalan’s Tales from the Crypt reboot efforts were squashed by TNT last year that meant the end of prospective horror anthologies for at least a little while. Then word got out that Creepshow was getting the green light as a television series produced by Greg Nicotero and exclusively streamed through Shudder. Horror fans rejoiced and waited with bated breath as the series took form and names were attached- Adrienne Barbeau, Tobin Bell, Jeffrey Combs, Kid Cudi and Giancarlo Esposito would be starring in the shorts. Stephen King, Joe Lansdale, Nicotero, Joe Hill and Josh Malerman, among others, would be providing the stories. Directors will include David Bruckner, Roxanne Benjamin and Savini.

Finally, we have the beginning of our series.

Caution Up Ahead- There Be Spoilers.

Based on one of Stephen King’s most eerie short stories (and that’s saying something!), the series revival begins with an all-time favorite of mine. Tobin Bell, Adrienne Barbeau and Giancarlo Esposito star in the story of a boy who is afraid to go back home with his father’s beer. Why? Because something just isn’t right with Daddy anymore. He’s drinking too much and he’s changing.Barbeau is the storekeeper that tends to the boy with a hot meal while Bell plays the town sheriff tasked with braving an oncoming hurricane to pay a wellness visit to the boy’s father. Tagging along is lifelong friend Doc (Esposito).

The men get to the apartment and are horrified to learn the truth about what’s been going on in the residence. Hysteria rises with each passing minute in the episode as scenes cut from the boy telling Barbeau all about the downward spiral of his father to Bell and Esposito realizing they’ve walked into a real-life nightmare.

This short story resides in a special place in my heart and… this adaptation just didn’t cut it for me. The switch from a terrible blizzard to a hurricane here was one that definitely took the foot off the gas pedal. While filming a blizzard is undoubtedly more arduous than shooting scenes with wind and rain, the story truly digs in deep with the thought of a blinding snow storm paralyzing the town. Here, a simple rain storm and power going out just doesn’t carry as much weight.

Sadly, the alien monster that is lurking in the apartment isn’t the scariest thing in this episode. CGI rears its ugly head far too much here- we see the monster too much and it’s not a pretty sight. I don’t mean that in a good way, either.

The installment ends blandly enough with an uninspired shock scare.

When you are re-introducing the world to the wonderful world of Creepshow and you’re featuring one of Stephen King’s most intense and entertaining short stories, you’ve gotta bring the goods. This one was as flat as one of Daddy’s beers. 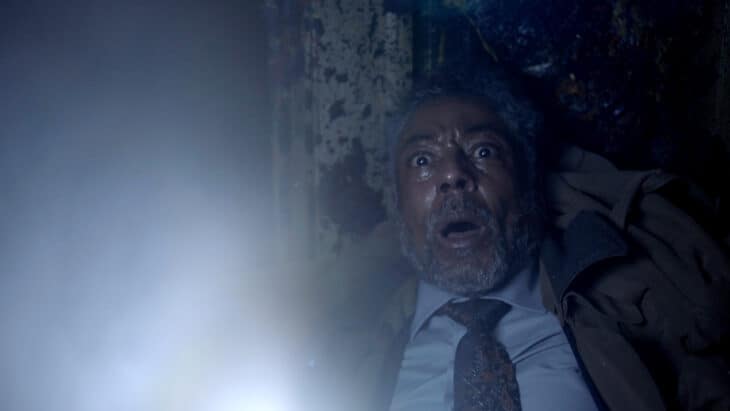 The House of the Head

The first episode’s bookend to King’s presentation is written by Josh Malerman (Bird Box, Inspection). Starring Cailey Fleming (The Walking Dead, Star Wars Episode VII: The Force Awakens), this one gets the narrative vibes right for a Creepshow episode but the aesthetics aren’t quite there. It’s too well-lit, too squeaky clean. But the story is a really fun one- a haunted doll house is terrorizing a family of figures much to the dismay of their child owner, Evie (played fantastically by Fleming). The reason behind the haunting is a mysterious doll head that is just about the creepiest detached doll head you could imagine. The story plays out exceptionally well – up until the end.

Every time we see the inhabitants of the doll house, they have moved and it’s usually a pretty creepy scene- a cop figure is peering into the attic with his gun drawn as the family watches on from the bottom of the stairs. A strong Indian chief (you’ll recognize him if you’re a Creepshow fanatic) is left leaning out of a window, no longer completely intact. Soon, the family has no one else to protect them and the fiendish head goes after them. The ending is weak, though, and that takes a lot of wind out of the sails. A good Creepshow presentation includes plenty of unnerving synthy music, clashing bright colors, sufficient use of the comic panel animation and above all else, some truly scary pay-offs at the end of the installments. This first episode didn’t provide any of these things but there’s still hope. The brains behind this project are far too talented, far too loyal to the beloved Creepshow brand and far too big of horror fans not to iron out these wrinkles and bring us the anthology series we all have been waiting for.

I’m not going to dismiss a series after its pilot episode and you shouldn’t either. Grab some popcorn, kick back and get ready for episode two. 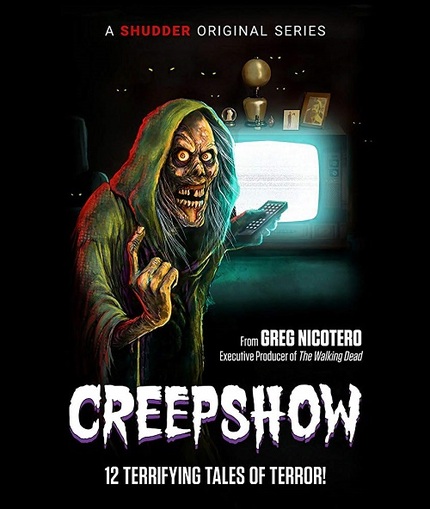