Happy Halloween Eve, folks! We’ve made it to The October Country and things are just starting to heat up here at Mangled Matters. We’ve got an awesome month planned for our readers, including a behind-the-scenes look at Wisconsin’s coolest and most chilling haunted house as well as interviews, reviews, lists and recipes that are sure to keep you in the holiday spirit all month long!

For today’s holiday celebration, we take a look at some of the weirdest, creepiest or downright haunted tales from around the globe. For the sake of keeping things fresh and entertaining here, I’ve elected to keep the Aokigahara Forest in Japan, Island of the Dolls in Mexico and Chernobyl off of this list. We’re looking for the lesser known spook locations and forgotten stories. So grab your fanny pack, lace up the hiking boots and let’s head out to the great unknown!

The Hill of Crosses (Lithuania) is exactly what it sounds like – a sprawling hill decorated with tens of thousands of crosses. One estimate hovers around 200,000 crosses. It only makes sense that there’d be some restless energy in the area. Spanning almost 200 years, the first crosses are thought to have been laid on the land sometime around 1831. The landmark is truly a sight to behold. Once night falls, however, stories of apparitions and ghastly beings run rampant. Best stay on the walkway during regular business hours.

Craco, Italy hasn’t been inhabited since 1963 when the locals up and left due to a whole bunch of natural disasters (floods and earthquakes) that just wasn’t making living there a whole lot of fun anymore. Reportedly bursting at the seams with curses and ghosts, you won’t find this village on any Travelocity search. The village was founded some time around 540 AD so there’s a ton of history to sift through on these grounds. Most of the buildings, now crumbling and decayed, can be dated back to around 1040 AD. It only makes sense, then, that shadow figures lurk from windows and voices can be heard whispering through the buildings. If you believe in that sort of thing. 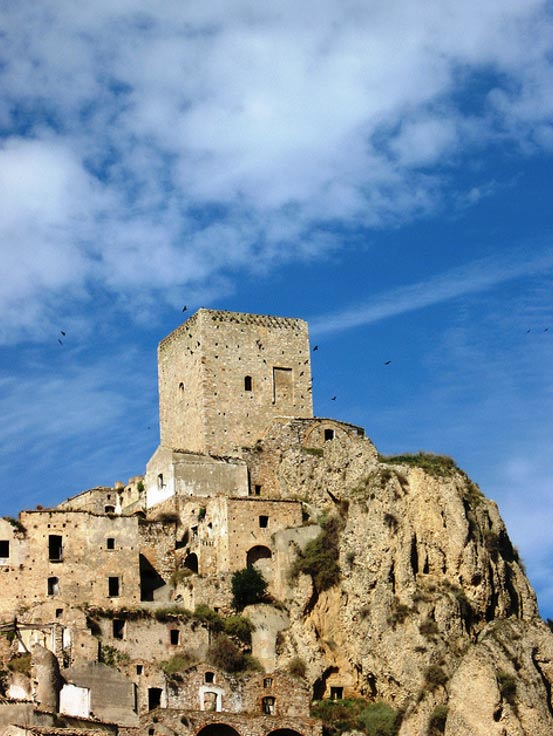 The Sedlec Ossuary in the Czech Republic is a beautiful architectural landmark. Unless you aren’t a big fan of human skeletons being used as decorative accessories such as chandeliers and banisters because that’s exactly what is used to create most of the visually mesmerizing aspects of this ossuary. The compact Roman Catholic chapel contains the skeletons of roughly 60,000 people. That fact alone would lead me to believe there’s some haunting going on in the area. Considering these skeletons are being arranged to hold lights and decorate staircases, and you’re just asking for an ornery orb or two to manifest through the halls. 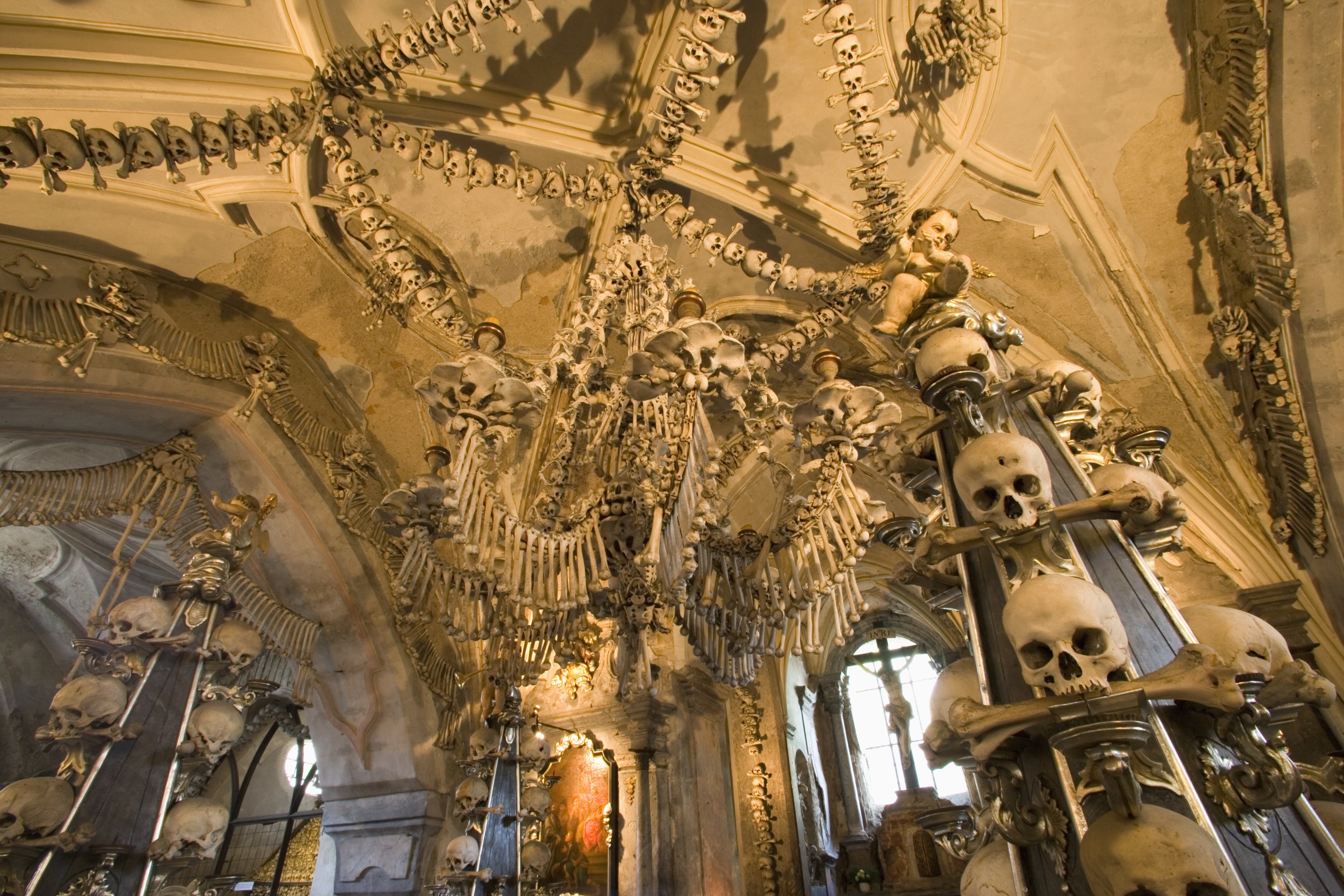 Don’t you hate it when you’re concocting a black magic potion and you forgot the antelope bladder? It’s a little more difficult than asking for a cup of sugar from a neighbor but never fear- if you’re into that sort of thing, you’ve probably got the stomach to handle a visit to one of the most notorious black markets in the world- Lome Bazaar in Togo, Africa. The place is literally labeled a “voodoo fetish market”. Lome is universally acknowledged as the birthplace of voodoo, so it only makes sense that this is where you can find human heads ground into fine powder and granulated elephant feet. Blood-stained idols, amputated limbs from assorted mammals and rows of mummified remains are all there for the taking. If the sights on the tables don’t turn your stomach, the stench of the place likely will- piles of corpses (from animal to human) litter the area.

As an American with a ton of family who hail from the Waterbury, Connecticut area, I am greatly distraught to have learned that there was an amusement park built solely to celebrate the verses and characters of the Bible. Because that’s not creepy in its own right at all. The place was shut down during the 1980’s and is now just a hotbed for Satan worshiping, supernatural visits and activities of the paranormal variety. Holy Land USA is as unnerving as it sounds, especially after thirty-five years of abandonment. The park included a Garden of Eden and miniature renditions of Jerusalem and Bethlehem. Wild greenery and vandalism stains the park these days but the plot of land still provides for some creepy photography. You may even catch the murmur of a disembodied voice or feel an icy gust of air howling through the dilapidated monuments. There are confirmed crimes that have occurred on the land, including a horrific rape/murder in 2010. To make things just a little more creepy, the land was actually purchased by in 2013 by the former mayor of Waterbury and a local car dealer with the expectations of re-opening the attraction. A new, brightly lit cross was erected and a few shrubs were cleaned up but things quickly fell into disrepair again and have remained that way since.

Nothing good on the radio? We’ve all been there before. But if you’re traversing the swamp lands of Russia and come across an ominous collection of radio towers seemingly in the middle of nowhere, you might want to high-tail it out of there as soon as possible. For nearly forty years, the headquarters to a radio station that no one claims to run broadcasts an eerie, monotone drone twenty-four hours a day, seven days a week. Tune in to frequency 4625 kHz to listen as the tone is only disrupted once a week or so by a voice stating a few random words in Russian. Conspiracy theorists have lost their minds about this place for decades now but no one is closer to the truth. Mostly because no one takes responsibility for the station. Oddly, once the Soviet Union collapsed, the noises and tones on the station actually spiked. Maybe it’s used by the Russian military (they’ve denied this, but of course they did). Perhaps it’s an attempt to contact extraterrestrial life.

Baraboo, Wisconsin isn’t a household name for a town but locals have had plenty to discuss around the dinner table for as long as many can remember. The town has urban legends and reported sightings that stretch back to the early 1900’s, including a young girl who spotted an enormous creature in the woods in 1910. The prints that the creature left behind were said to be twice as big as her father’s boot prints. Multi-colored orbs hover through cemeteries and a female apparition wanders the sidewalks with a stroller. More ominously, a Ringling Brothers Circus employee supposedly moved into town and several cases of missing children popped up shortly thereafter. The remains of these children were reportedly found in a well that screams to this day. The world-renowned circus actually was founded in Baraboo. As if all of that isn’t enough to make Baraboo, Wisconsin one of the weirdest towns in the country, there’s also the case of a mysterious lake serpent residing in the quiet northern town. Devil’s Lake serpent has been rumored to exist since Native Americans inhabited the area.