There are spoilers ahead.

Stop reading if you don’t want to read spoilers.

As a follow-up to the massively successful 2017 It, director Andy Muschietti returns with his familiar bag of thrills and chills to bring us It: Chapter 2.

Twenty-seven years after the first film’s horrific events, the Losers Club reunites as Pennywise begins to cause havoc and swallow children whole once again in the town of Derry, Maine. After a few drinks at a local Chinese restaurant, the creepiest fortune cookies ever and some nervous encouragement by their fearless leader Bill Denbrough, the adults decide to stick around long enough to end Pennywise’s reign of terror once and for all.

Muschietti and writer Gary Dauberman had some seriously high expectations for this venture and they weren’t going to get away with half-assing it. Regardless of your thoughts on the film itself, the crew behind the camera certainly shoot for the stars and attempt to give us one of the largest scale horror films ever.

With a run-time of nearly three hours, there’s a lot to dissect here.

There are some issues with the film. Let’s not pretend the source material doesn’t have its fair share of pitfalls and clunkers, though. For the most part, Muschietti & Co. do a wonderful job of bringing this massive story to life.

This first issue is a really personal one for me. Bear with me. Here we go..

Thankfully, Muschietti cut Bill’s wife Audra and Bev’s husband Tom out of this film, save for a brief moment at the beginning of the film for the both of them. One of the most useless subplots in the book and 1990 television mini-series gets ignored here and for that, I am grateful. The only thing that I would have hated more than Audra and Tom getting the attention they got in the novel and mini-series would have been if the film gave us the captivating subplot of Ricky Lee, the bartender who served Ben Hanscom following Mike Hanlon’s call to Ben who received far too many words in the novel.

We were given a proper adaptation that simply wasn’t possible through the television medium in 1990. The effects, casting, lighting, catering- everything is just bigger and better here. To fully realize the scope of this King novel, you needed a massive wallet to make things work.

Take a moment to think back on all the horror films you know of that have the sort of ensemble cast that this film boasts. The astronomical budget allowed for deeper dives into the mythology of Pennywise, the building of terror onto Derry and the devastating psychological effects dropped upon our beloved Losers Club. All things considered, this is the best adaptation of It by several country miles.

What absolutely works: the fantastic casting. The biggest win in this film is the incredible casting and almost perfect character development of the adult Losers. Every adult actor looks almost just like their teenage counterpart. Even the bubblegum-chomping pharmacist’s daughter looks like the same person, just twenty-seven years older in this one. The characters are fleshed out nicely, save for a few potholes here and there, and you truly find yourself rooting for the Losers.

Bill Hader is excellent. Jessica Chastain is phenomenal. James McAvoy brings the goods, as always, and he’s firmly entrenched as the third lead behind the previous two here. Shout out to James Ransone, who played the adult Eddie, for low-key stealing the show whenever he was on screen. 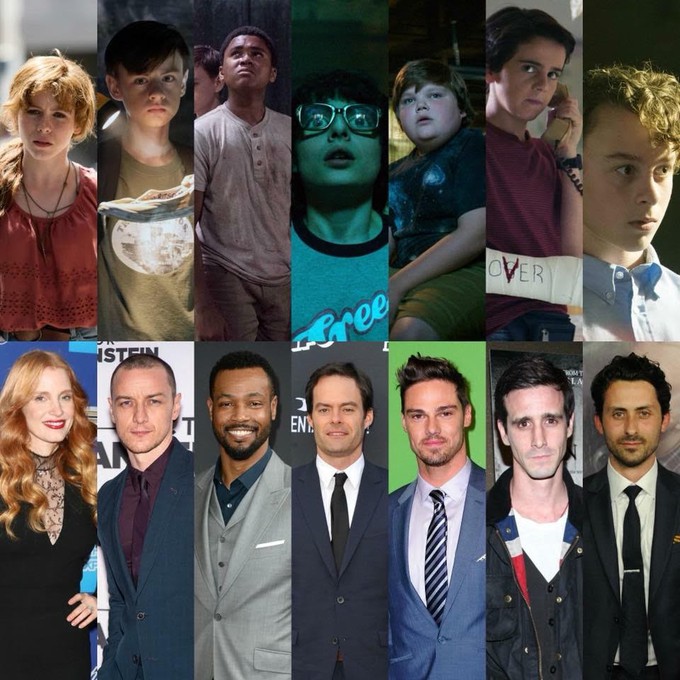 I would have really liked to see even more of Richie’s character spotlighted. Personally, I liked that this film didn’t skirt around his sexuality. Considering the Adrian Melon scene at the beginning of the film was shown in such detail and savagery, it would have been nice to compliment that with a stronger emphasis on Richie’s overcoming his ‘fear’ of being outed as opposed to just tossing in a smiling Richie as he etches “R + E” in a fence post at the end of the film. While that is a happy moment, it still sucks to know that the only three gay characters in the film either died or are forced to live with the heartache of seeing their love die at the hands of Pennywise.

The handling of the homosexual subplots in the film have rightfully become a hot take for many in the horror community. While I agree that this sliver of ugly hatred and violence has its place in the film, it was handled awkwardly overall. Adrian Melon’s death was somewhat displaced. Had there been more attention focused on the fact that Pennywise feeds off of the town’s hatred and fear, it would have fit in better. Instead, it felt like we got a violent beat-down of a fairly no-name character with no real strength behind what it all meant in the grand scheme of things. Definitely a missed opportunity.

What didn’t work for me: there were too many flashbacks, especially of things most audiences could assume had happened without being shown and told in the sequel. There could have (and should have) been much more time spent on Pennywise and his destruction of Derry during his return trip to the haunted town as opposed to the countless jumps back in time that showed us an underground bunker and a handful of straight-from-the-first-film scenes to remind us of what the Losers promised to do if Pennywise were to ever come back.

Another aspect that could have used less often was the forced comic relief. Humor is a huge part of King’s work, but there was just a little too much here. Some of the light moments didn’t allow for the proper tension to build at times. Other scenes simply fell flat and felt awkward, namely a specific messy kiss between a Loser and a ghoul with maybe the worst choice of music ever. The back-and-forth between Richie and Eddie was perfect. I didn’t have a problem with Richie spitting out smart ass comments or awkward one-liners during the scary stuff, too, because that’s how I handle most stressful situations. What I wasn’t a fan of was the drawn-out encounter with a Pomeranian that completely removed all tension from the most important part of this entire franchise- the ending. There was no need to turn the scene into an Abbott & Costello bit- as soon as the door opens and we see a Pomeranian there, we know it’s because Bill mentioned Pennywise turning into a Pomeranian for their final battle with the monster. Rather than keep the tension ratcheted up, I found myself picking through my Dots for a green one and wondering why the filmmakers thought it was necessary to completely deflate their ultimate scare.

Speaking of scares, those of the jump variety that were fresh in chapter one aren’t nearly as effective in chapter two. There are a few truly scary moments in this film, to be sure, but too many familiar faces and scares are microwaved from the previous film. While the leper was one of my favorite creatures from the first film, I could have done without him in the second. Let’s keep things fresh here- after all, Pennywise is the eater of worlds. He can certainly do better than just rehashing spooks from twenty-seven years earlier, right?

As with the first film, the CGI monster reared its head a few too many times for my liking. It wasn’t as obnoxious in this one in my opinion, but practical scares always win out and I would have loved to see less emphasis on the computer screen and more attention paid to the practical effects that could have really put this film over the top.

Perhaps the most chilling scene in the entire film was when an adult Bev encounters a maniacally muttering man who reveals himself to be a makeup-less Bill Skaarsgard. As drool oozes from his mouth, he applies white makeup to his face while sneering at a terrified Bev. The man digs his fingernails into his face, creating the red makeup lines that Pennywise wears so proudly and Bev dashes out of the hall as the man lets out a horrifying howl.

The film’s build-up promised a truly terrifying movie experience and the source material lent a ton of opportunities to give the audience just that. Unfortunately, this was more of a drama with creepy moments as opposed to an all-out fright fest.

We needed more Bill Skarsgaard. The man has made the character of everyone’s favorite evil clown his own. He could easily headline a three-hour movie on his own as the character and the movie would probably make a billion dollars. This film would have been leaps and bounds better had we had a chance to experience more terror at the hands of the shape-shifting clown as opposed to needless flashbacks or CGI retreads from the first chapter.

When Andy Muschietti started this project, it was always his intentions to go big and insist on not going home. He certainly achieved that to the tune of a $700 million box office for the first chapter and a $91 million haul on opening weekend for chapter two. I’ve been a fan of Muschietti’s since thoroughly enjoying Mama and I’m just as big a fan of his after seeing his It installments. The novel has its flaws and these films do, too. The first chapter is the superior one. The second chapter works enough to be a satisfying conclusion to the Pennywise lore even if there were a few missed opportunities.

All in all, It: Chapter 2 is a solid horror film. The nostalgia of seeing one of Stephen King’s most heralded works finally given proper treatment on the big screen is a major selling point for those of us who have read the novel. The fantastic character development and promise of more Pennywise propels this two-part franchise into uncharted territory as far as box office success goes.

I wanted more of the same energy from the first chapter. I was hoping for new scares and more vicious kills, now that Pennywise had his eyes set on adults rather than kids. But maybe that’s just it- things are always scarier from the lens of a child. This one wasn’t supposed to be as terrifying, rather focusing on the dread and emotional weight that adults are more prone to lie awake at night fretting over.

There are a few speed bumps along the way, as well as some humor (both necessary and unnecessary) but this is a clown car any Constant Reader or horror fan will have a fun time hopping onto.