Bev Vincent’s been doing this writing thing for a while now. He’s a Bram Stoker Award-nominated author who has gifted the Constant Readers of Stephen King some of our most beloved companions, The Road to the Dark Tower and (my personal favorite) The Stephen King Illustrated Companion. His award-winning short fiction has been included in a number of publications and he’s an integral part of the Cemetery Dance team as a contributing editor and content contributor. His News From The Dead Zone column is top notch.

Most recently, Vincent was tapped to edit an anthology of short stories that centers around the idea of the fear of flying. Whether it be paranoia, zombies or mechanical issues, there are all sorts of things that go wrong when you’re 30,000 feet in the air in a metal casket with windows and Flight or Fright has a fantastic table of contents featuring some of the most recognizable names in horror literature (King, Vincent, Joe Hill, Richard Matheson and Bradbury, to name a few).

When he isn’t working his day job, there’s a great chance you’ll find Bev writing. He graciously took some time out of his day to chat about his career, his writing routing and what he’s currently working on.

MANGLED MATTER: Were you always a horror and weird literature fan? Is there one book in particular that planted that horror-loving seed in you as a kid?

BEV VINCENT: I’ve always been a reader. I started young, and it has been a constant throughout my life. I cut my teeth on the Hardy Boys (which were often weird in their own way) and migrated to Agatha Christie. However, I was quite young when I first read Edgar Allan Poe’s Tales of Mystery and Imagination, and those stories stuck with me. As a teen, I probably read more science fiction and fantasy than anything else, but there was always Ray Bradbury, who defies categorization. Charming, surreal and often jarringly frightening. I really embraced horror when I went to university. I discovered King, but also Lovecraft. Then McCammon, Simmons, and all the other authors who were bursting onto the scene in the 1980s. Primarily, though, I love mysteries and crime fiction. That probably represents the majority of what I’ve read over the years.

MM: When you’re writing, do you prefer silence or noise?

BV: If I’m working on a first draft of something, I’m almost always listening to music. I’m listening to the terrific Kansas live album Two for the Show right now! When I’m in the revision phase, which is the more difficult and time-consuming part of the process, I prefer silence.

About a decade ago, my friend Brian Keene and I discussed the music we liked to listen to while writing. We discovered a lot of common ground, but realized we had some significant differences, too. That led to a project where we each created an album-length playlist for the other person to listen to while writing a novella. We didn’t intend for the other writer to necessarily write something directly drawn from the songs we picked, but rather to be influenced by the music in general. We’re almost ready to unleash that book on the public.

BV: Yes, definitely. I treat it like a job. I get up at 5:00 weekday mornings, spend 30 minutes on the exercise machine, and then go to my office and work until about 7:30, when I have to shift gears for my day job. Weekends are less structured. Some weekends I don’t get much work done at all, while on others I spend a lot of time working. Depends on what my wife is doing and what other things we have going on. In addition to writing, there are all the other things associated with the job: submissions, contracts, promotion, and so on that have to be done in that narrow slice of time I have available.

MM: As a part of the Cemetery Dance team for nearly twenty years now, how did you first get in touch with Richard Chizmar?

BV: I was a customer first, back in the ’90’s. A subscriber to the magazine as well as buying their books. In February 2001, Rich asked if I would be interested in writing a Stephen King news, reviews and commentary column for Cemetery Dance. The magazine had been on hiatus and, with the relaunch, he was looking for someone to take on that gig. I was flattered to be asked and I didn’t hesitate to accept. I’ve been writing “News for the Dead Zone” for them ever since, including an online version to keep up with modern technology!

MM: As an author yourself, what drew you (or still draws you) to Stephen King’s work on such an intimate level?

BV: I wasn’t reading much horror when I picked up my first King book, ‘Salem’s Lot. It was an impulse purchase at a used bookstore, along with a stack of other books that, no doubt, consisted mostly of Asimov, Heinlein and Piers Anthony. Everything about that novel captured me. The story, the setting, the characters. I immediately knew I wanted to read more from this author. This was 1979, so there weren’t many books to catch up on, but what books! Carrie…Night Shift…The Shining…The Stand. Then I had to wait for something new from him to come out. Thankfully, he’s prolific and I didn’t have to wait long!

I’ve been reading everything he’s published ever since. I’ve been known to say that if he decided to write romance novels, I’d still read them because I know they’d be great stories and, most  importantly, terrific characters. I’ve read thousands of books, but there are many I look back on and I can barely remember what the story was about, let alone who the characters were. With King, I enter this brief but intense relationship with a group of characters and that stays with me long after I’ve finished the book.

MM: FLIGHT OR FRIGHT sees you join forces with Mr. King to put together a harrowing anthology featuring Matheson, Doyle, Bierce, Simmons, Bradbury, Joe Hill, Mr. King himself and you, among others. How long did it take this project to come together from start to finish?

BV: The project was conceived on the first of August 2017, in a diner across the road from Bangor International Airport. We had a rough manuscript by mid-October; however, at that time King’s contribution was going to be The Langoliers, a “novella” only in the Stephen King Universe. It’s fully as long as the rest of the anthology. Steve decided to write something new for the collection instead and, hearing about it, Joe Hill thought he might have something to contribute as well. Then Owen King suggested a relatively obscure story he thought would fit. This was around the first of November. The story we were hoping to use as the “coda” fell through because the author didn’t want it reprinted. I was working on an essay for the Poetry Foundation about King’s relationship with poetry and was reminded of his love for James Dickey’s “Falling.” I suggested it and Steve said he was thinking the same thing. We had the manuscript assembled in near-final form by the first of December, although there were some subsequent revisions to the original stories. So, in summary, pretty quickly! Barely more than a year from conception to publication day.

MM: Did you have trouble whittling down the table of contents on this one or was it more difficult than a usual anthology considering the very specific theme?

BV: We discovered early on that Googling “scary flying stories” returned more fact than fiction. A lot of people have had bad experiences in the air, and those anecdotes overwhelmed our search for appropriate fiction. We soldiered on, though. I would say we pretty much strip-mined this sub-sub-genre. We didn’t leave anything noteworthy on the table that I’m aware of, and we haven’t had anyone come along in the months since the book was announced saying, “I can’t believe you didn’t include [fill in the blank].” So, we didn’t have to make any hard decisions about leaving out stories.

MM: What are you currently working on?

BV: I’m trying to write a short story for the next Mystery Writers of America anthology, although I’m close to the deadline and not sure I’ll get it finished. I drove to Austin a couple of weeks ago for KillerCon and worked out some of the story problems I’d been having as I sped down the highway, but I’ve been overwhelmed by the release of Flight or Fright since then, so I haven’t had time to actually write the story.

I have two novellas I’m finalizing. One is for a contest—it needs a little structural work, so that’ll be what I tackle next. Then there’s the novella I mentioned earlier that is part of the Brian Keene project. That one is essentially finished and we’re in talks with a publisher. It will be the longest piece of fiction I’ve published.

Then I have this novel series I’ve been hacking away at for years and it’s time for me to decide which of several ideas I want to get done first, push aside everything else and write the darned thing!

Pick up your copy of FLIGHT OR FRIGHT today! 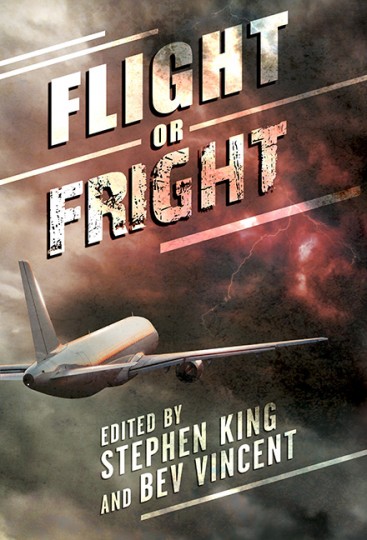