It’s the most wonderful time of the year. The leaves are turning, the nights are getting cooler, horror movies are popping up on television more frequently. For most, that wonderful little stretch of September through October serves as the ultimate celebration for all things spooky, creepy and weird. For some, that celebration lasts all year-long and for that, we horror fiends are grateful.

One such person who dabbles in the horror arts 365/24/7 is Tabi Weaver, a special effects artist who runs DOA SPFX and shares her awesome work across the social media landscape on the daily. Weaver doesn’t stick strictly to the horror world with her art, but more often than not, you’ll see her showing off some wicked makeup designs that include a victim of the terrifying Elf on a Shelf, evil clowns and even Slimer from Ghostbusters.

Weaver is keeping things creepy out there and I had the pleasure of chatting with her recently.

MANGLED MATTERS: Have you always been drawn to the macabre and horror scene?

TABI WEAVER: Yes, absolutely! Halloween as a kid was better than Christmas, for sure. I use to hide and scare my brother and sister all the time and dress up as literally anything that I could get my hands on. I was a huge baby, though. Like, crazy easy to scare, jump scares and what not. I grew into it (laughs)

MM: Of all the make-ups and projects you’ve done, is there one in particular that sticks out as especially difficult?

TW: To date, the one I am working on currently is the most difficult I have done. I am building a fully functional werewolf suit to stand seven feet tall with full prosthetic makeup. I can’t go into too much detail but it will be revealed during my next live demo in October at Frightmare in the Falls! Some of my illusions have been very tricky as well, specifically a severed head illusion paint that I did on myself. I had the weirdest angles ever to work with!

MM: Are you self-taught or did you attend school for art or make-up?

TW: I am entirely self-taught. I went to college to study Law! My father is an artist of many mediums, specifically a tattoo artist, so I was always around different types of art work. I grew up at conventions and always had some pretty cool costumes for Halloween as a kid. I failed art in school, though. Every class I took and I hated myself for it. I gave up taking art in any form and moved on to politics, debate teams and criminology. I did well. But I hated it and it wasn’t who I am. I began creating again, painting and so on. Then I was an apprentice with my dad learning how to tattoo, which is where my love for body art, body painting and makeup started.

MM: What are some of your favorite horror films?

TW: A few of my favorite horror movies, good question. I love An American Werewolf in London, for many reasons. It’s a horror comedy but the makeup is a staple. It is one of the reasons that I wanted to get into Special FX makeup. I just loved it so much. All of the A Nightmare on Elm Street films, so much so that I walked down the aisle on my wedding day to the theme song. One of the grooms men was dressed like Freddy, too. (laughs)

The one that I always leave until last, Night of the Living Dead, the ‘68 Romero and the ‘90 Savini films. Two of my favorite people, ever!

MM: Who are some of your favorite artists?

TW: This is a tough one! I look up to so many artists! First, Tom Savini. I have followed his stuff for years, reading his books, attending his Q&A’s at conventions, documentaries, you name it.
Another artist that I look up to and respect dearly is Lucia Pittalis. She is incredible at what she does. She can transform herself into literally anyone, flawlessly. She is someone who I have always and will always look up to. She is an incredibly talented, sweet, humble and strong female role model. There are so many artists I could mention that have made an impact on my life as an artist. I wish I could sit and talk about every single one of them, I could go on and on!

MM: I imagine Halloween is a big deal in your home. Do neighbors ask you to help with their makeup?

TW: Halloween is a very big deal in our house! My husband and sons are a big help with that! We decorate big time, with fully functional animatronics and projectors. I am usually booked with makeup appointments the day of Halloween and the weekends leading up to it! 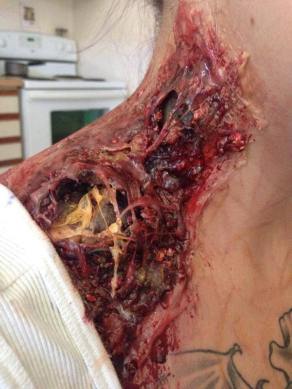 MM: Do you attend conventions or shows and, if so, where can fans see you next?

TW: Yes! I do occasionally attend conventions. I am new to doing that, though. I will be attending my third convention in October. You can find me doing live demos in Niagara Falls, Ontario at Frightmare in the Falls with The Blood in the Snow Canadian Film Festival October 27th and 28th. I will be at their booth between demos for the weekend with some of my prints available! The schedule will be available soon on the Frightmare in the Falls Website!

MM: Seeing as how it is the most wonderful time of the year, do you have a specific Halloween memory from your childhood that you hold near and dear to your heart?

TW: Oh boy, yes!! I can’t recall my age, Maybe around six or so, but my parents took me to a Halloween party with their friends and one of the guys there was dressed like Beetlejuice. The hair, makeup.. it was accurate and I was terrified and so curious. Long story short, my custom designed wedding dress was based off of Beetlejuice.

Do yourself a favor and keep up on Weaver’s art at DOA SPFX Makeup’s Facebook page!