Dacre Stoker, the great-grand nephew of Bram Stoker, has proudly announced an upcoming book tour for his last novel. DRACUL, the first authorized prequel to his great-grand uncle’s legendary masterpiece, will hit bookstores on October 2.

Stoker wrote the book with fellow horror author JD Barker. The novel centers on a young Bram Stoker who personally encounters some of the creatures of the night he would go on to write about later in his life. The book has received a ton of interest since it was announced last year and the film rights have already been snapped up by Paramount, with IT director Andy Muschietti reportedly in the fold to direct.

There’s literally no one better to continue the Stoker/Dracula legacy than Dacre, considering Mr. Stoker is a proud scholar and historian of the Stoker estate. The prequel is considered an interpretation of the mysterious 101 missing pages from the original DRACULA manuscript.

After painstaking research that included poring over personal notes and journals from Bram, Dacre and Barker are ready to unleash their novel upon the world.

The official synopsis of the novel is as follows:

“It’s 1868, and Bram, at 22 years old, has locked himself inside a desolate tower to face off against a vile and ungodly beast. Desperate to leave a record of what he has witnessed, Bram scribbles out the events that led him here — a childhood illness, a haunting nanny, stories once thought to be fables now proven true.”

The eight-city tour will stretch from October 2nd to October 30th, with Stoker also announcing presentations at Atlanta’s Monsterama on October 6th and 7th, and the Aiken (South Carolina) County Museum on October 14th. If that weren’t enough, Stoker is also doing a cross-promotion with the Aiken Civic Ballet on November 2nd and 3rd in which the ballet troupe will be performing DRACULA live on stage.

Check out the dates below and if you have a chance to attend a date, do yourself the favor and go! 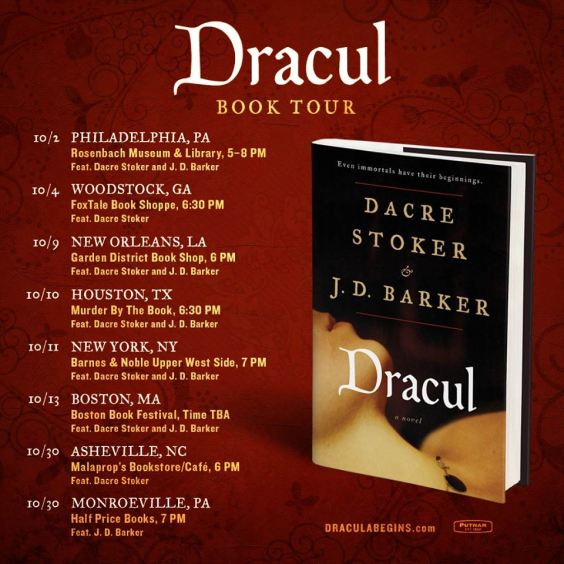