If you haven’t heard by now, Hereditary is scary. And awesome. And probably the best all-out horror film that has come out in quite some time. Did I mention it’s scary as hell?

If you’ve seen the film, you’ve probably read the title of this article and instantly thought to yourself, ‘How did he narrow this list down to five moments?’ and to that I say- I simply went with the five moments that have nestled deepest into my brain and refused to leave over the last four days since I’ve seen the film.

If you haven’t seen the film, this is your chance to kindly close out of this window, immediately see the film and check back in at a later date because there be spoilers galore in the next several paragraphs.

Still here? Ok, cool. Now let’s get to the nitty gritty and break down my five most disturbing moments from what is an instant classic in my book.

The nerves are already frazzled in this scene, as we watch big brother Peter carry his struggling little sister Charlie out of a party and into their vehicle. Charlie did what every young teen is wont to do and grabbed a slice of chocolate cake being served- the only problem is, Charlie is deathly allergic to nuts and, you guessed it, this cake had ’em. As Peter struggles to drive through the encroaching fog outside and the pot fog in his head, Charlie is gasping for her life in the backseat. Peter is tearing down a narrow back road when Charlie opens her backseat window and leans out, desperate for air. An animal carcass in the road comes up quickly and Peter swerves to avoid it, getting far too close to a light pole and… his sister is decapitated.

It’s an absolutely stomach-flipping, jaw-dropping scene. I was left wide-eyed and silent for the next several minutes, all the way through mother Annie’s (Toni Collette) horrific wailing upon finding the decapitated body in the backseat of her car the next morning. To make matters worse (and the film so much more horrendously grim), the audience is treated to a long close-up of the head the next day as it is being consumed by flies and ants.

One of the best rules of thumb when creating horror is “the scariest thing is what’s behind a closed door”. Lucky for audiences, Hereditary director Ari Aster subscribes to that belief and manages to scare the living hell out of us using light and shade and the inky black shadows that seem to engulf the family home whenever night falls. Two moments in particular really got to me.

Peter wakes up in the middle of the night, still haunted by the tragic death of his sister when he sees a shadow against the wall in his room. But this isn’t a regular shadow, and as his eyes adjust to the darkness, Peter sees that it is Charlie standing in his room. She lets out her patented “cluck” and her head rolls off of her body, manifesting into a play ball that rolls to Peter’s bed. The scene caused an audible inhale of fear from the audience I was watching the film with.

The second moment is on a different night when Peter (again) is tormented in his bedroom (again). It’s a blink-and-you’ll-miss-it moment that is almost easy to miss even when seeing the film on the big screen, but a large man is standing in the doorway of Peter’s room, grinning menacingly at the young man before all hell breaks loose in the home.

Both moments were inexpensive but very effective scares that this film is chock-full of.

There was so much that just went gonzo terrifying in the last fifteen minutes of the film, I’m lumping it all in to one moment here.

Poor Peter- yet again, he is woken up in the middle of the night and instantly feels that something isn’t right. As he calls out for his mother and scans his bedroom, the audience is treated to his mother, Annie, crawling across the wall behind Peter. What made the scene even more unsettling is that Annie moves absolutely silently and is gone, out of frame, as quickly as she appeared.

Peter makes his way through the home, seemingly aware that someone- or something- is lurking. Rather than turn on lights (which is the first thing I and any other rational human being would do), Peter continues his stroll through the world’s most haunted house before coming upon the charred remains of his father near the fireplace. Yeah, that scene didn’t make this list but it’s definitely an honorable mention.

As Peter surveys the scene, horrified, who do we see perched in the corner of the ceiling like a rabid bat that got into the house? Annie! As soon as Peter sees her, she descends and chases Peter through the house. This moment really got to me because it left me wondering if she was chasing him to attack him or if this was “real Mom” Annie trying to get her son out of the house before all Hell (literally) broke loose.

Peter makes it up to the attic, closing the door behind him and gasping for air as Annie is pounding on the attic door at his feet. But she isn’t pounding with her fists- no! She’s attached to the ceiling, headbutting the attic door with such speed and force that it sounds like a jack hammer was set against the flimsy door.

The washer and dryer for my apartment is located in the basement of the building. I’ve thought of this scene every night I’ve gone down to do laundry since the weekend. It’s a miracle I haven’t tripped running up the stairs and broken my neck. 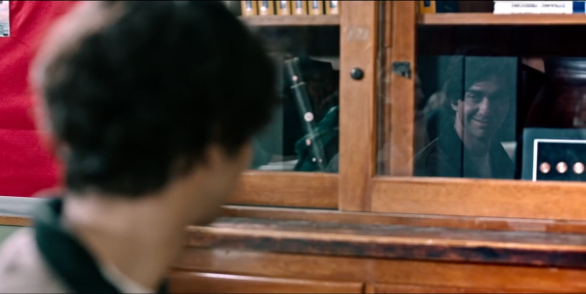 Peter loses it at school

While his crying left much to be desired as far as convincing acting is concerned, you have to feel for Peter. The kid clearly has a broken relationship with his mother, he is guilt-ridden following the death of his sister and he’s also in the middle of getting possessed by a demon from Hell.

Things go from bad to terrifying one day at school when Peter momentarily loses all control  and not only sees his reflection in the mirror smiling back at him, but his hand contorts in a way no properly assembled hand should and his face balloons up much like Charlie’s did before during her allergic reaction, before she passed away.

Not scary enough for you? Peter then proceeds to bash his face against his desk few times before screaming in terror, blubbering on the floor of his classroom while his classmates look on (and, in a nod to this day and age, one classmate is recording the incident on his phone).

Annie goes for the jugular

Perhaps the most disgusting and horrifying scene in the entire film is also, in my mind, the most heartbreaking. As the ritual for King Paimon’s transfer into Peter’s body reaches its climax, we see Annie levitating in the attic as Peter looks on in horror. With candles burning all around and satanic conjuring spells written across the attic, Annie uses something (razor wire? piano wire?) to tear into her throat. As if that weren’t traumatizing enough, Annie begins to tear through her throat at a feverish pace. Blood flies and Annie’s empty, mortified eyes stare down at her son as she tears deeper into her neck. Peter finally snaps and jumps out of the attic window with a scream. As the camera stays on Peter’s lifeless body in the yard below, we hear the cutting of Annie’s neck continue until finally we hear her body fall to the attic floor with a thud. It’s absolutely sweat-inducing.

So there you have it. Did your most upsetting moment make the list? Let me know what you think down below or share your opinions on Facebook!