Stephen King needs no introduction. Owen King is Stephen’s youngest son, an acclaimed author in his own right and someone who suddenly has found himself flying in rarified air after the release of Sleeping Beauties, a 720-page collaborative effort between father and son.

Speaking of rarified air, that’s exactly what I was inhaling on September 30th at Riverside Theater in Milwaukee.

The Kings are in the middle of a nationwide tour to promote Sleeping Beauties and when word got out that they’d be making their way through the Midwest, there was no way in Hell I’d be missing the chance to see my all-time favorite horror icon.

Sitting roughly thirty feet from a living legend is sure to make anyone a little mesmerized, but for me, this was a once-in-a-lifetime experience that had my heart pounding almost out of my chest for the first ten minutes of the event.

As the clock struck eight p.m. on an autumn night in Wisconsin, the Kings settled into a pair of chairs positioned beneath the limelight on the beautiful Riverside’s stage. What followed was sixty minutes of pure magic, complete with laughs, anecdotes and intriguing excerpts that kept the 2,000-member audience buzzing throughout the conversation. 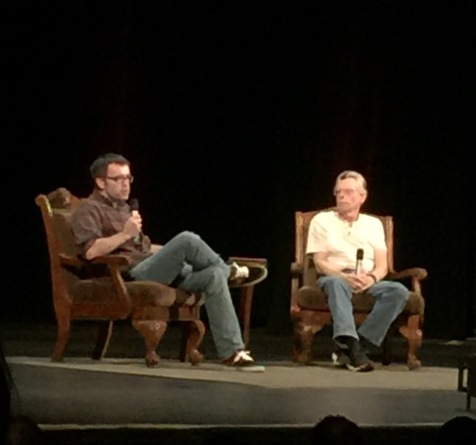 Owen came equipped with a worn copy of The Stephen King Quiz Book, much to the delight of the crowd. For the record, The King of Horror went 2 for 4 when grilled about his masterpiece, Misery. The Kings cover a topic in the book each night during this tour, while also asking each other new questions during each stop. Owen joked that by the end of the tour, he’d be asking his father when the last time he cut his toenails was. When Owen chuckled that he had an entire notebook of questions prepared for his father, while the senior King only had “four questions on your iPad screen”, Stephen quipped, “Yes, I have a big iPad. Because I am old… annnd rich.”

The audience gobbled up every word, raucously clapping at any mention of a King novel, film adaptation, Tabitha King, Joe Hill or the lone Donald Trump jab of the evening. Owen began the night quickly mentioning the positive reviews of Sleeping Beauties while also acknowledging a few negative ones- to which a fan in a front row barked out, “Fuck ’em!” More laughter, applause and a chuckle from the Kings.

Stephen reminisced about getting his first “actual, dedicated word processor” when Owen was “just a tyke”, a typewriter from the Wang Corporation.

“People would come in and say, ‘where’s Steve?’, and my wife would say, with a straight face, ‘upstairs, pounding on his Wang.'”

We also got to hear Stephen gleefully growl, “They all float down here!” when discussing It and he also teased his next book, due out next year called The Outsider. The novel is about a well-respected and beloved townsman who suddenly finds himself accused of a horrific crime.

Of course, before the questions and audience interaction came an excerpt from Sleeping Beauties by each author. Owen introduced us to a talking fox while Stephen introduced us to the warden of a women’s correctional facility. The readings were perfect (of course) and the writing was crisp and vibrant (of course).

Riverside Theater was a most gracious host. The staff was courteous and outgoing. There wasn’t a bad seat in the house and the PA system and lighting were perfect. The venue was large enough to draw awe yet small enough to still allow for an intimate experience for an event like this.

I’ve yet to start Sleeping Beauties but if last Saturday night was any indication, something tells me we haven’t seen the last of an Owen and Stephen King joint effort.

A truly spectacular night, I will never forget where I was on September 30th, 2017. 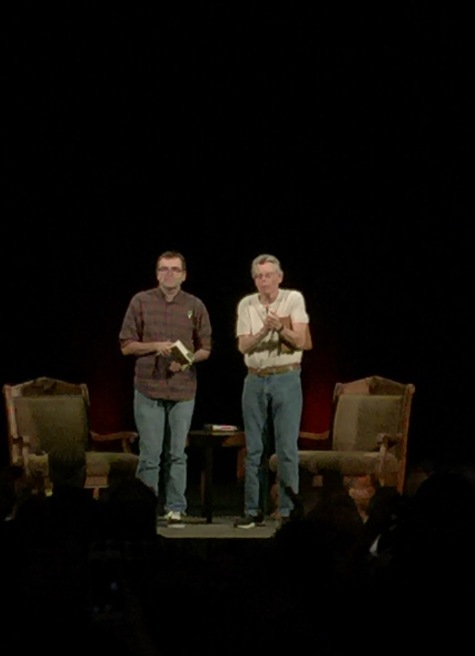 2 thoughts on “A night with Stephen and Owen King”