For those of you like me, horror and macabre movies were not always your cup of tea.  When I started dating my now-husband three years ago, he informed me that horror was basically his life.  I remember being intrigued, but not fully convinced.  But then I finally moved in with my honey – and wow.   There were the movies, memorabilia, website, and such. It clicked then for me that horror clearly was a major part of his life and it was awesome being a part of that passion.  I started watching movies with him (our first movie date was the terrifying film Sinister) and suddenly I found myself enjoying that unfamiliar feeling of being scared.  Heart pumping way too fast, palms sweating in fear and Hairs rising on the back of my neck were now reactions I eagerly waited for.  In fact, I can confidently say the horror genre is now one of my favorites.  Quite possibly, my favorite.

The following is a list that is sure to introduce you newbs to all corners of the horror spectrum- vampires, ghosts, monsters, Gothic romance and murder.

Fright Night (2011) starring the late Anton Yelchin as Charley Brewster, your typical teen, who finds himself in an unsavory situation.  The house next door has been sold to the charismatic Jerry Dandrige (Colin Ferrell).  Charley’s lovely girlfriend Amy (Imogen Poots) does not believe him when he confides in her about his suspicions of Jerry, who he witnessed doing some very mysterious things at night.  Soon, he’s seeking the advice of illusionist Peter Vincent (David Tennant), who also dabbles in the history of vampires.  Things spiral out of control, forcing Charley to save his mom, his girl and his friend from Jerry’s world, while trying to stay alive himself.  Director Craig Gillespie combines horror with slices of comedic relief in this lovable remake of danger, laughs and creepy ass blood suckers.

Charley and Amy scope out new neighbor, Jerry, hoping to find something to back up Charley’s accusation once and for all. Whatcha doin’ over there, Jer?

Thir13en Ghosts (2001) is a gory tale of intrigue that kept me jumping.  Arthur Kriticos (Tony Shalhoub) inherits an oddly built, glass mansion willed to him by his dead uncle, Cyrus (F. Murray Abraham).  Not long after moving in, they realize the shifting walls and violent ghosts were not mentioned in the will.  While Uncle Cyrus was notably strange, the family couldn’t explain the unsettling feeling they began to have in the house.  While avoiding thirteen distraught spirits, which are definitely trying to kill them, they fight to stay alive and make their way successfully through the glass maze and to safety.  This movie brings to light the most terrifying entities that still creep me out when I watch this film.

Arthur trying to decipher one of the many strange hieroglyphics written all over the glass walls.  What the hell does it say??

After.Life (2009), directed by the relatively unknown Agnieszka Wojtowica-Vosloo, is a mind-fuck of a flick.  Teacher Anna Taylor (Christina Ricci) is just going through the motions of life with her long-time boyfriend Paul Coleman (Justin Long) when she gets into a horrible car crash.  She is pronounced D.O.A. and brought to a funeral home run by the eerie Eliot Deacon (Liam Neeson), who seems to be a slave to the dead’s thoughts on their previous lives.  While being prepped for her funeral, Anna struggles with accepting her death. Madness ensues when a passerby claims to have seen Anna at the funeral home ending in one of the most shocking endings I’ve seen.  After this film, I’d love to see more from this director, as she hasn’t done much major film work since this piece. 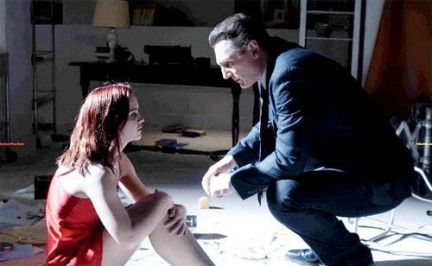 Eliot tries to convince Anna that she really is dead.  All while ignoring her pleas to be let out of the funeral home.  You’re dead, dammit!

The Mist (2007) is a stunning work by director Frank Darabont (The Shawshank Redemption), showcasing a Lovecraft-inspired novella of larger-than-life monsters wrecking havoc on a small town.  David Drayton (Thomas Jane) and his family experience what is thought to be a devastating storm, forcing David to head to a local market with his son for supplies.  A thick, dense fog covers the land, trapping patrons, military personnel and store employees inside the store.  Rumors swirl and the townsfolk fear going out into the brooding mist.  Panic quickly turns to violence, especially when Bible thumping Mrs. Carmody (Marcia Gay Harden) starts addressing the crowd, talking about sacrifices and shit.  Rationally thinking adults morph into fear driven crazies with emotions so strong, they lose all reason and logic.  A heart-wrenching ending that stuck with me well after the credits.  Was it possible military testing or divine intervention?  I am still unsure.

Crimson Peak (2015) is actually my favorite horror film of 2015.  Directed by the insanely talented Guillermo del Toro (Pan’s Labrynth), this movie had me glued to the screen.  Sir Thomas Sharp (Tom Hiddleston) and Lady Lucille Sharp (Jessica Chastain) are a brother and sister duo that head to America to introduce an invention of Thomas’ for purchase and production.  Edith Cushing (Mia Wasikowska) meets Sir Sharp and is moved by his efforts to try to make something of himself.  They quickly marry before moving back to England to start their life, while waiting to hear if the contraption was accepted for mass production.  Edith sees the relationship between Thomas and Lucille is close, albeit almost too close, and she starts to learn of their troubling past – just in time for the jaw dropping finale.  I can’t say much more – I’ll ruin the movie – but let’s just say, I thoroughly enjoyed it and the acting was top-notch! 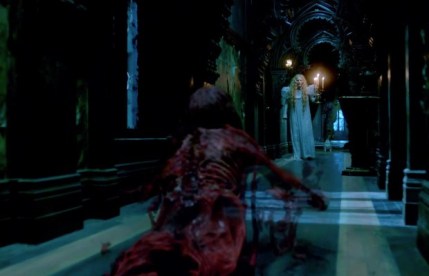 Edith tangles with an entity that apparently lives in her new home, too!  Yikes!

Whip out this list for your squeamish boyfriend, old school granny, or anyone who hasn’t had their ass bit by the horror bug yet. I promise, they won’t be disappointed!