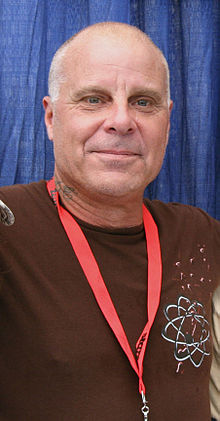 Growing up, Michael Myers scared me more than any other horror villain out there.  You could wake up from Freddy.  You could ultimately outrun Jason.  But no matter what you did and how you defended yourself, you simply could not get away from the boogeyman.

One of my bucket list interviews has always been to talk to the man behind the mask, and as I did more research, I learned that there were actually three gentlemen who sported the iconic William Shatner mask in the original film.  Recently, I had the chance to speak to Tony Moran, the literal face of Michael Myers.

He was paid $250 for his part in one of the most iconic horror films of all time.  As a cast member of the 1978 smash hit Halloween, you would think Tony would have quite the career in the genre.  But much like Gunnar Hansen, who also stepped away from the horror scene for quite some time after playing the original Leatherface, Moran had no problem making peace with the fact that he’ll forever be better known for the mask he wore as opposed to his real life skin.

After Halloween, Tony Moran decided to do what any sensible actor would do- tackle a career as a mortgage broker and all but fall off the face of the Earth for a few decades.

He’s back, though, thanks to horror conventions and a rejuvenated love for the independent film scene.  It was a true honor to speak to the man who gave the boogeyman a face.

MANGLED MATTERS:  The film shot in a ridiculously short window of time, twenty-one days.  Were you on set from start to finish?

TONY MORAN:  They just brought me in when I was needed.  You know, being such a short shoot, I mean Donald Pleasance was only there for like five or seven days, so it was done incredibly fast.  Jamie Lee worked the most, of course, but even that wasn’t a typical film schedule for the star of a film.  So it was definitely a unique film in that regard, as well.

MM:  To think you can make arguably the best horror movie of all time in three weeks is incredible.

MM:  You’ve said in the past that you didn’t expect this film to do more than a few weeks at the drive-in initially.  When did you really realize that you were part of something huge with Halloween?

TM:  When we were filming, you gotta think- a horror movie in 1978 called Halloween was about the corniest thing I’d ever heard!  Introducing a mask, which had never really been done, was even cornier.  I thought maybe a few weeks in the drive-in and that’d be it.  But then what happened was the movie was playing in a bunch of small theaters across the country and there was a well-known movie critic on TV, Rex Reed, who happened to see the movie and he gave it the thumbs up, so to speak, so that’s how it took off.

Back then, with no Netflix or anything like that, the only way to see a movie was in the theaters before it came out on VHS or whatever, so if a movie was popular and doing really well, it would stay in the theaters for, you know, a year or a year and a half.  So after about five or six months of it playing is when I knew something was up and I finally saw the movie.

TM:  No (laughs), I was invited to go to the cast and crew screening but that was one of the funniest things I’d ever heard because I thought the movie was such a joke and I threw the invitation away! (laughs)

I was embarrassed to do it at first.  I didn’t even tell my acting workshop that I was in the movie at the time.  I didn’t tell my friends or family, either!  It’s really amazing.

MM:  How did the film get pitched to you?

TM:  I was broke and I needed the money, don’t get me wrong, but I first turned it down because it just sounded ridiculous.  Even after I was told Jamie Lee was in it, I was like “so what, I don’t give a shit- I’m still not doing it!” (laughs)

But then I was told Donald Pleasance was in it and I was completely floored.  I was a huge fan of his.  I argued with the casting agent that there was no way he was in this movie and she told me, “Tony, I swear to God, he’s already signed on. He’s in this movie.”

That’s what made me go on to the interview, and when I interviewed for the film, all I knew was that I played a psycho.  When I talked to Irwin Yablans and John Carpenter, we only chit-chatted for about ten minutes.  They didn’t really say much about the actual film, and I didn’t know I had to wear a mask until after I signed the contract and I was on set.

MM:  What was it like, on set, that first night?

TM:  The girl brought the coveralls, the boots, a mask and a jar of Vaseline.  She told me the Vaseline was for my hair so the mask would just slide off my head and I go, “wonderful”. (laughs)

She goes, ‘”listen- don’t worry. There’s a scene where you strangle Jamie and she yanks the mask off and you see your face!” and I go, “aw fuck, whatever..” (laughs)

MM:  Did you keep anything from the set of the film?

TM:  Nah, you know, some people kept their scripts, but I didn’t even keep that.  I had no lines!  What the fuck do I need a script for? (laughs) 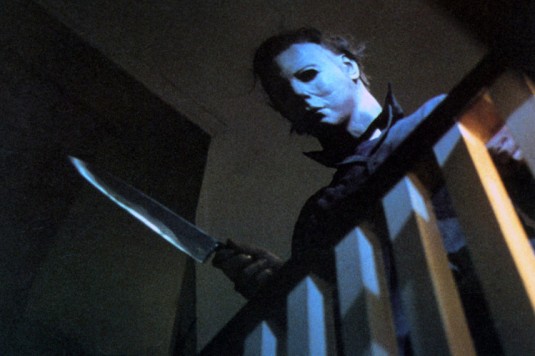 MM:  You left the film business to pursue a career as a mortgage broker.  How often were you recognized for your film and television work, namely The Waltons and CHiPs?

TM:  Nobody recognized me from Halloween, but I’d done a ton of TV work on some series, so I’d get recognized from that quite a bit.  But never Halloween, which is great because I love not being recognized.  People still say, “you look familiar” and I just say “nah, naw”.. I like being the man behind the mask and kind of get a kick out of having people finally learn that I was the one wearing the mask.

MM:  After twenty-seven years away from the industry, what led you to get back into the horror genre?

TM:  I was found by a guy that was looking for me for ten years.  I went underground, pretty much, and so I didn’t get a whole lot of contacts because it was damn near impossible to find me (laughs)

This guy happened to go to a party that a friend of mine was at and he overheard my friend talking about me so we got in touch, he did an interview with me for his magazine and he started telling me about the horror convention scene.  So I got into that, and those are awesome, and eventually it got me into films again.  Independent films, though.  No Hollywood stuff.

MM:  You’ve been a producer now, too.

TM:  It was fun being a producer. On Beg, I got to bring in Tony Todd, PJ Soles and Michael Berryman into the project as well, so that was fun.  It was interesting.

TM:  The Exorcist, Psycho and The Shining really got me.  I don’t really have a favorite genre or anything like that, though.  I just like good films.  I love mafia films, too.  I love that stuff.

MM:  What has been your experiences at horror conventions?

TM:  You’re talking about the best fans in the world, bar none.  Horror fans are the absolute best.  I just feel like I’m one of them- we hang out, we understand each other and they’re the nicest, greatest people in the world at these shows.  I have a blast and really appreciate all of the kind words and support they give me to this day.

MM:  What horror conventions can fans see you at in the upcoming months?

MM:  What are you currently working on?

TM:  A few weeks ago, I worked on a music video.  I’d never worked on one before.  We filmed it at an old women’s correctional facility in east LA, so that was pretty bad ass. (laughs)

I get my throat slit in the video, but it’s a Slayer video, so what do you expect? (laughs) It was awesome to meet the band and work with them.  It was a lot of fun.

I’ve also got a movie that’s slated to start filming this month, and something always seems to come up around this time of year, too, so we shall see. 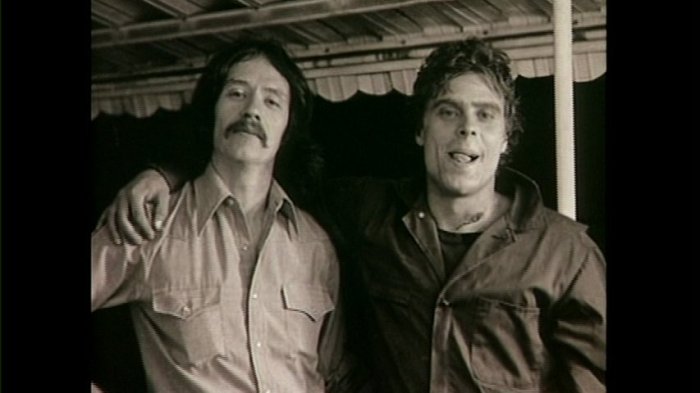 Director John Carpenter and Moran, on the set of Halloween