Michael West is able to say what most of us can only dream for- he does what he loves for a living.  In case this is your first time visiting this blog, that can mean only one thing- he gets paid to scare the living crap out of people.

Mr. West is an author, and a damn good one, of a handful of books and numerous short stories and articles.  Most recently, Michael has taken up the task of ensuring the good name of vampires stays that way with his latest anthology, Vampires Don’t Sparkle!.  If it’s blood and terror that you are looking for in your children of the night, then this is the book for you.  West doesn’t hold back in his own tales and early reviews on this anthology promise that none of the other authors do, either.  I eagerly await my copy!

Amidst all of the literary carnage and living the humble life in the Midwest, Michael was gracious enough to take a few minutes to chat with Mangled Matters.

Beware the woods… they’ll get you…. 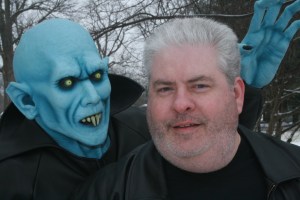 MANGLED MATTERS:  Growing up, what did you watch or read to feed your horror fascination?

MICHAEL WEST:  I’ve loved Horror as long as I can remember. I used to trick babysitters into letting me stay up late to watch Night Gallery episodes and Hammer films. I’d collect toys based on the classic Universal monsters. In the eighties, when a new Horror film opened, I was always first in line. I read everything Clive Barker put out. I’ve always loved the writings of Richard Matheson, Ray Bradbury, and Rod Serling. Now, I get inspiration from contemporary authors such as Brian Keene, J.F. Gonzales, and Tim Lebbon, but Gary A. Braunbeck is one of the authors I admire most. He brings this emotional reality to his fiction that is simply amazing. His work elevates the entire genre, and I was so thrilled that he was able to write the introduction to my short story collection, Skull Full of Kisses, so honored and humbled by what he had to say.

MM:  Per your Facebook page, your children are convinced there are spirits inhabiting the woods near your home. Have you had any experiences with this phenomena?

MW:  I went on several ghost investigations, doing research for my novel Cinema of Shadows, and I did have an experience or two. I was in what they called “the demon closet” in the old Woodcarvers building in Converse, Indiana, and witnessed a hanging light moving like a pendulum when there was no breeze or any reason for it to be moving. I asked questions, and received spikes on an EMF meter in reply. I also spent the night there and woke up to hear people arguing in the hallway outside my room, but there was nobody there. Very creepy place! I never felt alone there. It always felt as if I were being watched.

MM:  Judging by the title of your most recent anthology, I’m sensing you need to tell us how you really feel about the Twilight film series. How did Vampires Don’t Sparkle! come about? Can you share some insight on the stories in the collection?

MW:  I actually tried reading the books, but I just had too many problems with them. I like my female characters to be strong, intelligent, independent women, and Belle was this mousey, insecure thing so desperate for a boyfriend that she attempted suicide multiple times, just so her boyfriend would come back to save her! Add to that the fact that sparkling vampires is just a stupid idea, and yeah, you could say I don’t have much love for the series. I knew there were better vampire stories out there, and I knew who I wanted to tell them. Add to that the fact that proceeds would be donated to cancer research, and this was a project I had to be involved in.

MM:  As president of Indiana Horror Writers, what does a typical meeting consist of?

MW:  We talk about the industry as a whole, our various projects, and we try to get involved as much as possible in our local schools and community to help foster a love of reading and speculative fiction in particular. We appear at various book stores and conventions in the area to promote our works and, again, raise awareness that there is a lot of great talent in the state of Indiana.

MM:  If you had to pick one short story of yours to represent your career up to this point, which one gets the honor and why?

MW:  Oh my…Well, my short story “Goodnight” was named Best Horror Short Story of 2005 by the P&E Readers Poll, and it does touch a lot of my themes of love and loss, but my personal favorite has to be my ode to Asian Horror, “Jiki.” I just love that story. I’m a huge fan of Takashi Miike, and I wrote the story as a tribute to him. Funny thing is, when it was published, it was in an issue of City Slab Magazine that featured an interview with Miike on his life and work. I was truly honored.

MM:  You’re stranded in a haunted house for the night. What one horror movie and one horror novel are you bringing with you?

MW:  POLTERGEIST and THE SHINING.

MM:  If you could sit down and chat with three literary icons, alive or dead, who makes the guest list and why?

MW:  Stephen King and Clive Barker, because I grew up with their work and they are the whole reason I became a writer. I did get the chance to chat with Clive at a convention a few years ago, and it was such a thrill! The third would be HP Lovecraft. His mythos has been a HUGE influence on my work, and while I don’t like his style of writing as much as some of the other early masters like Poe, it would be amazing to pick his brain for a bit.

MM:  As a horror convention regular, can you share a few memorable moments from over the years?

MW:  Wow, so many moments…the conversation with Clive Barker would have to be near the top of the list. I’ve also enjoyed meeting George Romero, John Carpenter, the casts of some of my favorite films like FRIGHT NIGHT and RETURN OF THE LIVING DEAD, and probably best of all, I got to spend the weekend in and around the mall where they filmed the original DAWN OF THE DEAD. For a Horror fan, that’s like taking a trip to Mecca. 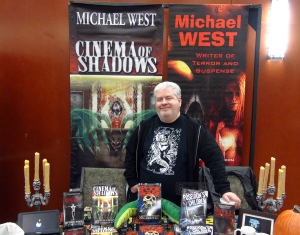 MM:  Feel free to share all the awesome news of any upcoming projects you are working on!

MW:  Right now, I am working on the next book in my Legacy of the Gods series, Hades’ Disciples, which should be out this fall. I also have a short story, “The Grove,” which will appear in issue #13 of Shroud Magazine. And I’m working on another short story, “Inner Goddess,” for the upcoming Book of the Dead anthology. Faithful readers can always keep up with the latest news on me and my projects via my Facebook page, Twitter feed, or by checking into my website.

As always, I want to thank Michael for his time and sincerely encourage all of you to check out the links provided in this interview to learn more about Michael and his work!