About a week ago, I sent out a request to any and all friends who might be willing to help me out. I needed a backyard for a few scenes for one of my films. It would be a small cast and crew, so whoever was nice enough to let us squat on their property for a few hours wouldn’t have a whole horde of unfamiliar faces around their home, and I promised we’d clean up any and all messes we made.

One of my best friends, Lauren Jarecki, came to my rescue when she enthusiastically replied to my status update with “use our yard!! We even have a bomb shelter!!!”

Now, Lauren’s known me for about 11 years now, so she knew just how to reel me in. She had me at ‘bomb shelter’.

The next few days were a blizzard of brainstorms and excitement- I put the film project I was currently working on on simmer (I don’t put things on the back burner, I just turn down the heat sometimes) and started pounding out a script to utilize the glorious piece of scenery we as indie filmmakers don’t happen to stumble upon every day.

As a huge fan of the old school horror flicks, with a really tender spot for the Vincent Price films, the gritty look of Texas Chainsaw Massacre and the Troma classics, I began formulating my plot.

The idea came together rather quickly and easily- mix in one part real-life horror, throw in some nods to a few classic tales and voila- I was already foaming at the mouth, and it was only Tuesday!

Next- casting. I’ve been blessed to have a bunch of friends who are the most gung-ho, supportive and fun-loving peeps a fella could ever ask for. I consider myself a social jitterbug of sorts- I feel like I can get along with anybody and everybody, however, my circle of true best friends is a close-knit group that I am deathly loyal to and don’t plan on letting anyone slip away anytime soon. So, it was easy to put together the small list of people I wanted for this project.

Finally- the effects. From the beginning, I wanted to make sure this stayed true to exactly what it is- a short horror film that doesn’t even register as a “low budget” project (I spent more at McDonald’s after the shoot for my camera guy than I did on the effects*). This doesn’t mean the film’s production value was taken lightly- it means I know what I had in my hands here- an HD camcorder, a handful of great friends, some fake blood, and a fun story. Thus, ‘Stitches’ was born.

*the effects that are used- blood, mostly- was easy enough to create and considering I’m known as the horror guy at work, it should come as no surprise that I had all the material and supplies I needed for this shoot already lying around my apartment. 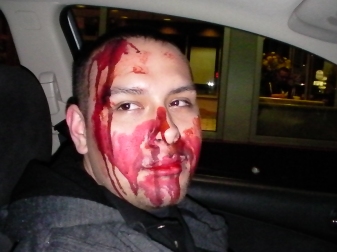 As always, I sincerely appreciate each and every one of your support! You will never know exactly how much your kind words, encouragement and help means to me. All I can do to pay you back for your generosity is make sure I make the most fun, craziest horror shorts I can imagine.

So, for your reading pleasure, feel free to take a moment or two to read the synopsis of my latest horror short, ‘Stitches’.

A county coroner is under investigation for missing and vandalized corpses under his watch. As tension builds throughout the community, the accused man goes into hiding in his home.

With the hammer of justice just about ready to fall, two amateur horror enthusiasts who run a blog and see this as a big ticket for their blog, contact the man and ask for an interview. To their surprise, the fellow agrees.

Once the two guys arrive at the house, they quickly realize the truth is far more terrifying than the rumors.

It’s gonna be a cheap, fun, kinda gross out horror short and I absolutely cannot wait to show you all!

One thought on “‘STITCHES’: my latest horror short project!”