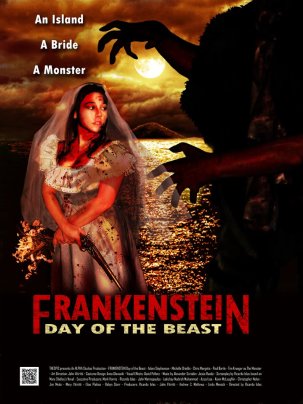 We’ve all heard the story. Some have succeeded in spinning their own version of the tale. Others have failed. This film delivers on every level.

‘Frankenstein: Day Of The Beast’ tells the tale of Victor Frankenstein and his beautiful new bride, his cousin Elizabeth. But this is no ordinary newly wed couple. Seven heavily armed and dangerous soldiers are assigned to protect the young bride from a monster that lurks in the woods. While everyone else seems to be lost in a fog of confusion and speculation about the beast, it seems Victor knows more than even he’d like to know about the dangers within the woods.

When Victor’s personal army starts dropping like flies in horrible fashion, it becomes clear the creature has one real target as prey- Elizabeth.

Michelle Shields shines in the role of Elizabeth, as a woman who not only possesses the beauty the story wants to portray, but also the intelligent, arguably lead role this adaptation needs.

I’ve had the pleasure of chatting with Michelle on several occassions. Not only do I admire her work ethic, I also love the fact that she isn’t simply ‘in it for a paycheck’. She takes her time when selecting films to be a part of. She does her homework on the cast and crew. Thus, her career has maintained an integrity you don’t see too often in the indie horror world- no gratuitous nudity or over-the-top exploitation from Ms. Shields.

In this film, Elizabeth is portrayed as a fantastic homage to the old-school horror films. Credit Michelle for tapping into the character completely and delivering a spectacular performance.

Adam Stephenson gives a fantastic performance as Victor Frankenstein, the mad genius behind the monster they are fighting for their lives against. I didn’t find myself sympathizing with Victor as much as I expected (or even would have liked to, in some instances) during this film, but that’s not Stephenson’s fault. There were a few parts in this film that I wish gave Victor a bit more emotional leverage in his character.

Tim Krueger aces the role of the monster, excelling where many Frankenstein adaptations have failed since the great Boris Karloff mastered the role in 1931. He is able to show the raw, primal emotions the monster feels in a way only the great monster men have portrayed as speechless beasts.  This monster also has a unique twist to the classic Frankenstein monster- the beast can regenerate itself after being injured. I thought that was a really cool, in the way the werewolves of ‘The Howling’ were able to do the same so long as they weren’t mortally wounded. I always give bonus points to a film for bringing something new to a classic tale.

‘Frankenstein: Day Of The Beast’ plays well as an homage to the Hammer Films of yesteryear, giving us a solid body count, plenty of blood and excellent acting. Overall, I thoroughly enjoyed this film and would recommend it to anyone who is a fan of independent horror films.